When I first moved into this town, there were a few things that were made pretty clear to me early on. It was mostly word on the street and the Hathian Observer that delivered most everything we needed to know about this brutish town full of corrupt police officers, gang members, as well as the occasional hooker.

I remember reading one article on a Reject nailing a Crow to a cross, over in the graveyard if I recall. You could go on The Observer’s website and find a dozen other articles like that, and each one is equally or more disturbing. Yet, over the last few months, maybe longer, it seems like something has changed in this town.

Could it have anything to do with the departure of the former police chief, known for his hell-bent crusade against gang members? Did some of the top gang members finally die? Now, I am not saying this town is free of gang activity, it is far from it. You can go down any street and talk to just about business manager and find evidence of other gangs causing turmoil in their area.

The Red Queens and the Reapers seem to be the two that most everyone has a run with of late, as well as some un-affiliated criminals with no real gang behind them. So, what has really changed in this town that no one is complaining about Rejects?

I took it upon myself to do a little investigative journalism, all part of one of my classes on campus. My first step was to go into town and see what kind of information I could gather from the locals. Most, when asked about the Rejects, could barely recall a run in with the now elusive gang.

A few more questions guides me to Radar Records, where many say the Rejects are rarely seen. I am warned by one old man not to be caught lingering there too long. He said the people with “black bands on their arms” usually don’t like outsiders sniffing around there unless they are there to buy music. I probably should have felt more fear than this, but not hearing much about the gang being seen helped me to feel a little more at ease walking over. 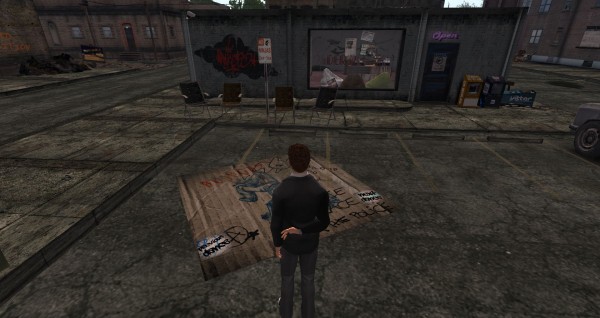 I didn’t see anyone out front save a few customers occasionally walking in. Through the glass window of the building, I see the clerk behind the counter, staring me down for a moment; that is until a customer walks up to talk to them and I am apparently forgotten outside, standing near the old spot on the ground that says “f#ck the police!” It looks to be written on some sort of dance mat, with other various inscribing and doodles on it.

About twenty minutes passes with me just standing there in a nice suit, notepad and pencil in hand; the wind is a little cooler and occasionally would rip at my tie. I kept expecting the longer I stood there, eventually someone would walk up and run me off. Did the Rejects still come around here? Shouldn’t I have been a bigger target if they did? I mean, I’m not one to risk my life but dressing in a nice suit on known gang turf has to be some sort of grounds for them to pick on me.

I lingered about an hour or two and sure enough, no one ever showed up.  Well, correction…I was propositioned by a hooker but she wasn’t wearing any gang colors that I could see. She wasn’t wearing much of anything, come to think of it.

I decided that I had wasted enough of my time and opted to head back to the office to finish up my report. After piecing together various stories and interviews, I can only say that there are various theories as to why we don’t see much of the Rejects of late. There is some that say the leader of the gang got married and started a family, as many say they’ve seen the child.

The same gang has suffered a few deaths over the years, including one Caris and Jin Kohime or as he was known, “The Worm,” as well as a girl named Paige. No telling how many more that we just couldn’t find anything one as well.  So, could it be that the gang, riddled with deaths of friends, opted to live a more peaceful life? What happened to the other bands many feared? Has Piper, the notorious leader, settled down and given up on her life of crime? Most of all, has the town finally seen the loss of one gang?

If so, this could be a new beginning and a new era of peace, at least without having to fear a Reject anyways. We still have the other gangs to worry about, but maybe if one crumbles, the others will follow.

Open Letter To The Hathian Observer