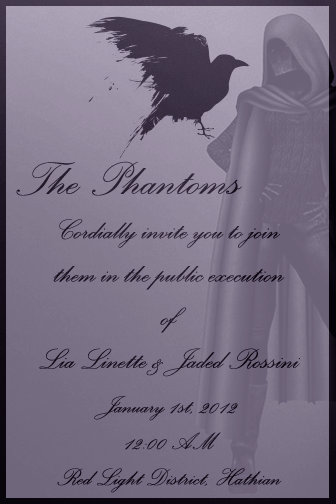 It has been more than ten days since local Hathian residents Lia Linette and Jaded De Luca Rossini went missing, throwing Hathian into a frenzied search for the two, both of whom are employed at Hathian General Hospital. Missing posters have plastered the city while friends and family of the two young women have been begging for information or leads. 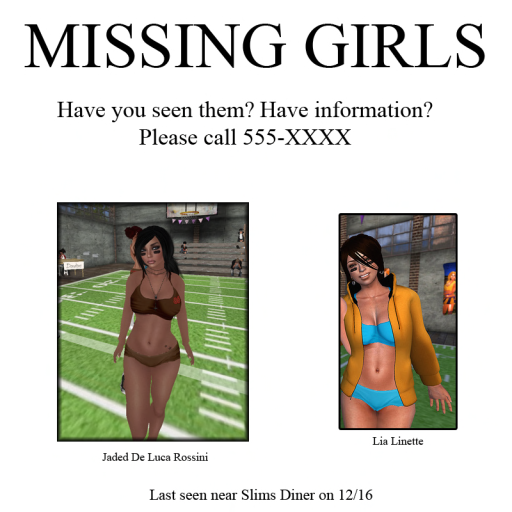 Last night, an anonymous caller contacted the paper identifying herself as the mysterious ‘Raven’ that has been plaguing the city alongside a band of masked and cloaked menaces now identified as The Phantoms, and claimed credit for kidnapping the two young women. Raven went on to tell us that the two are alive, but very sick and in need of urgent medical attention. She demanded a ransom of $10,000.00 per girl, or $20,000.00 total in cash to be delivered by midnight on New Years Eve, or promises that the two will die a gruesome death in a public spectacle.

Raven has requested that whomever wishes to pay the ransom should call the following number to make arrangements. 555-9255 ((IM: Piper Delvalle or Ika Meiyo))

The HPD are urging the public not to contact the kidnappers directly and instead are insisting that anyone who wishes to pay the ransom contact Detectives Sora Senizen or Baden Daines instead.

The Phantoms have been plaguing the red light district of Hathian for several weeks now kidnapping young women and terrorizing local citizens. Believed to be held captive by them, in addition to Linette and Rossini are missing Hathian citizens John Ross, Macen Renierd, Hita Verma, and Isabella Rosa.

The Phantoms are also suspected to have been involved in the murder of Cheryl Fox.

These individuals are considered armed and extremely dangerous; the HPD warns against anyone trying to make contact with them or anyone claiming to have any affiliation.