On the evening of October 29th, a local woman was stopped from cutting off her own foot.

The psychotic episode, which might be attributed to the reoccurring gas leaks that the city is experiencing, happened in the Grind around seven at night when the woman walked in wielding a large axe and donning a hockey mask.

According to Dr. James Matfield, who was at the scene and stopped her from carrying through with her plans, says she was convinced she had diabetes, and was about to amputate her own foot to save her life.

“She wouldn’t let go of the axe.” says Matfield. “We even started having a tug-of-war of sorts.”

Also on the scene was assistant manager of the Grind, Charlice Darwin, who happens to be friends with both Matfield and the woman. “She was rattling on about diabetes and zombies and blood.” Darwin says. “She clearly either had mental breakdown or got a bad batch.” 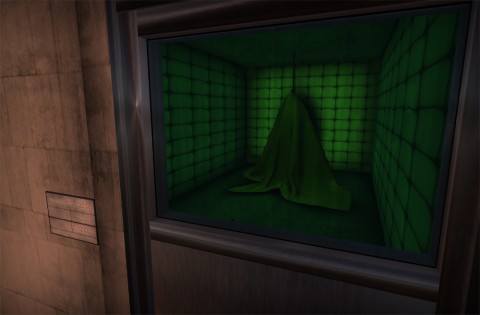 Zombies aside, Matfield called the police, and responding officer Lilith Murphy was the first on the scene, and officer Von Heckroth arrived shortly after.

“She looked like Jason’s kid sister with that mask.” comments Murphy. “..We couldn’t use mace, especially with the axe she was holding..”

It took three people to restrain the woman after she was brought down, including both of the officers and Matfield. A struggle ensued, but she was quickly cuffed, and afterward, her agitation seemed to decrease, and she cooperated fully.

“She was a harm to herself, as well as others, so we had to take her to the psyche ward.” says Matfield.

No one could be contacted to see if the woman is still in the padded cell, or what happened afterward, but The Observer is still working to get the details.