Officer Alphonse Rudolf,31,was discovered dead by a single gun shot to the head on King’s Highway, opposite of Rader Record Store on the 20th of December. A call made to the 911 dispatcher by an unidentified male sent police from the HPD to the location of the body, with the caller claiming “I dun killed dis cracka. Come get em. Kings Highway across from Rader’s.” Officers Tymur, Portal, as well as Kenethy, and Creotz and Detective Moonshadow were dispatched to the scene, only to find the dead officer laying in a pool of blood on the street. 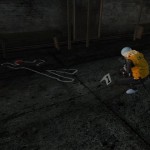 According to the official police report, Rudolf,31, was warned off from investigating a suspicous individual who he believed to be a suspected Reject gang member just days before he was murdered. Officer Portal was first to arrive on the scene and discovered a 9mm bullet lodged in the Kevlar jacket the officer was wearing as well as the cause of his death-a gunshot wound to the head.  Notes were found on the officer detailing the suspect Officer Rudolf was investigating,a Dontavius Streeter, 25. The officer’s gun was found nearby although police found that they had to make another arrest when a Caucasian female known as Andrea Moretti,34 was apprehended trying to steal the deceased officer’s belongings including his wallet and HPD badge. 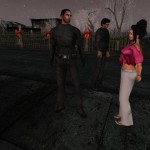 Moretti was taken into custody and charged with suspicion of murder, pending results from forensics and interrogation. Before she was cuffed to be taken away, Moretti was apparently pushed to the ground by an Officer Tymur,28. ” It was cold and there was ice, she seemed to be falling so I did what I could to assist, but alas she landed on her head. I suppose that’s using your head wisely.” The officer stated when asked about the injuries Moretti sustained- bruises on her face. Moretti herself revealed to the Observer in an exclusive interivew, “I had nothing to do with the murder. They attacked a semi-innocent woman. The HPD need to stop this tirade of abuse. It needs to end here. All I was doing was walking.” Moretti explained that she did in fact try to steal the dead officer’s badge and wallet. ” I stole it because I thought I could make money off of it..” She also stated that, “They won’t find a thing on that dead cop. A fingerprint from me taking his stuff, but that’s it.” Moretti claims that she saw two figures leaving the dead officer when she arrived, “One man and one woman. The man was tall..medium build. I didn’t see his face or anything. The woman was around 18-25. Pale. Long Red Hair. Blue Eyes. She drives a racecar thats blue or white..She told him to get away before the cops come.. mentioned something about a gang when talking to her partner. I think she said the Misfits..or something along those lines.”

The Chief was later seen driving to the scene and inspecting the grounds while the forensic team worked on retrieving evidence and officers tried to keep the public away from the scene by cordoning off King’s Highway. 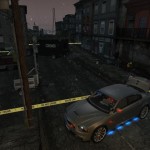 No statements have been issued so far by the HPD but the location of the murder and the possible gang connection suspected on Streeter in the notes on the suspect the dead officer do point to the Lower 9th Rejects being involved although Moretti was arrested on the charge of suspected murder, she has protested her innocence and is being defended by her lawyer, Redvan Carpaccio,28, who publically stated, “Andrea Moretti isn’t the killer, she was just in the wrong place at the wrong time the investigations must continue and my client should be set free. My client should be set free as soon as possible due to the violations and the abuse she is getting by the HPD in jail! ”

As of yet forensics need to determine whether or not Morreti had anything to do with the murder of the officer and if she is cleared then the HPD will have to carry out an investigation into who really is behind the officer’s murder. As for the HPD, they have lost another member of the force, slain while on duty in the often hostile streets of Hathian.