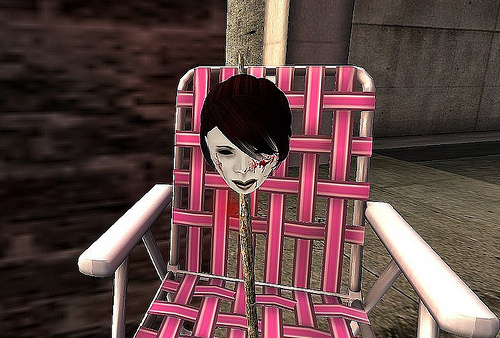 Another dead, mutilated body was found on the streets of Hathian. This time it was a naked, headless female corpse identified as Adriana Gambino. She was found just outside of the alleyway between Berthier Street Bakery and Meat Beaters butcher shop.  The victim had several stab wounds, including in both wrists and stomach. Later, her head was found on a stick. It was shoved in a lawn chair in front of the Hathian Fire Department main station.

The question is: how many more brutal homicides does it take for the Hathian Police Department to get this town under reign?

Adriana Gambino left behind quite a few children, though their ages are unknown at this time. Their names are Blake, Cara, Miracle, Temperance, Paulie, and Rayge.

It has been revealed that there are a few possible suspects. One of them is Aisling Markus. The name “Ais” was carved across the victim’s chest. After some investigation, Aisling Markus, who has a record of drug possession and usage, was named as one of the prime suspects. The other suspect is Ellis Millet, as he was spotted near the scene.  He’s described as a large shirtless reportedly blind man with many skull tattoos.  The case is under careful investigation by the HPD, though they refused to comment on said case. More information will be reported as they are revealed.  If you have any information for the HPD, please do not hesitate to call their non-emergency line 555-339-4939. Your name will be anonymous if you wish it to be.

Any pictures of the mutilated body was not included due to graphic nature.