A felon wanted for the kidnapping, sexual assault and attempted murder of Marissa Hambrook-Vyper was today arrested following a joint operation between the HPD and Moonshadow Investigations.

Richard Hillburton, 30 something, had kidnapped Mrs. Hambrook-Vyper, demanding $500,000 in ransom. The money was duly delivered, but unknown to the perp it contained a tracking device and an explosive dye. The cowardly fiend proceeded to shoot his hostage and made his escape with the money. Fortunately Mrs. Hambook-Vyper was not fatally wounded and is now recovering from her wounds.

Hillburton returned to his lair thinking he was going to get away scot-free and a rich man, but as he opened the money bag his despicable deeds came to a halt with a bang! The explosive device triggered, covering him from head-to-toe in an indelible pink dye. 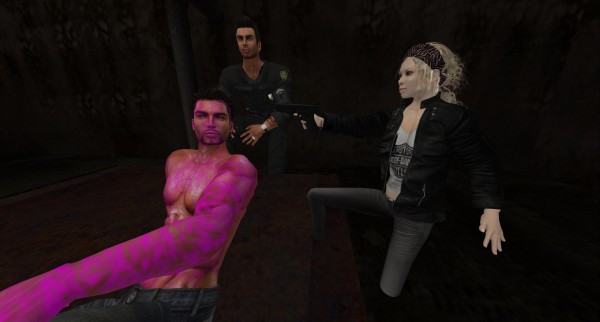 To add to the pink-perps woes, agents from Moonshadow Investigations were tracking his every move from a mobile surveillance van. Calling for assistance from the HPD, Corporal Zahos Vyper arrived and together with Angel Moonshadow from the Detective agency they entered the suspect’s hideout.

Unfortunately, the half million dollars of ransom money was completely destroyed by the dye and when asked if she was worth it, the victim’s husband said, “If you ever have your most beloved person kidnapped give me a call and tell me how much money you’d consider worthy to get them back.”

The victim too was less than forthcoming when contacted, saying, “I won’t feed your sensational report.” Although later she went on to say, “I don’t have much to add. I won’t give you details of what this bastard did to me. But I want to add one more thing. I can’t thank Officer Vyper and Moonshadow Investigations, especially Angel Moonshadow, enough for what they did to bring me back alive. I will never forget this.”

A spokesperson for Moonshadow Investigations said in a statement “we never comment publicly on our client’s cases,” however a source at the hospital described the injured perp’s condition as “in the pink!”