Briony Privette, 19, a resident in Hathian, is claiming that Lieutenant Jack Hartigan of the Hathian Police Department abused his position and mistreated her after she was arrested for a minor crime.

“He arrested me a while back for carving a drawing into his hood. He tazed me, then threw me in the trunk of his cruiser and left me there for the mechanics to get out the next morning,” Privette admitted, confirming the official report description of her crime.

“I have un-medicated schizophrenia, and…being locked in that trunk had me frantic. You don’t do that kind of stuff to a girl like me.” She also added, “I was let out by a ((NPC)) mechanic when they heard me screaming and kicking in the back. As soon as they let me out, I ran. I feel that what he did was out of line.” 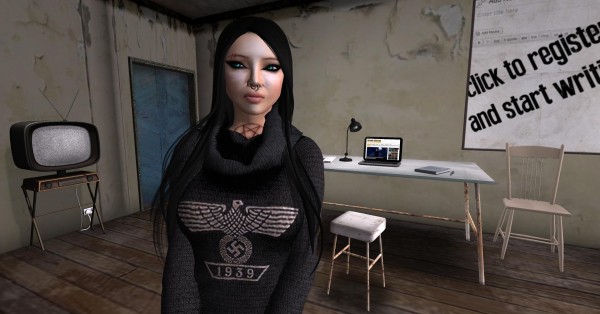 Privette stated to the Hathian Observer that this wasn’t the only incident involving Hartigan where she allegedly suffered from excessive brutality after arrest.

“About a week ago, I was arrested for assault on an officer because he was bashing a woman’s head into his cruiser and she ended up having a seizure, so I attacked the officer. I don’t know who he was, but he tazed me, and when I got to the jail…Jack did things,” she claims.

The officer she assaulted was not Lieutenant Hartigan but Privette alleges that, “I was changed and everything, but when I asked for food, Jack came down with some rotten potato salad in between stale bread slices, and he just threw it into the cell with me. After that he left, so I…kicked the food around because I refused to eat it.”

Privette described how her alleged treatment in prison worsened when she refused to eat.  “When he came back and saw the mess, he came into my cell and grabbed me, then threw me up against the bars. Then…he cuffed me to the bars and forced me to hang there for over a day. I couldn’t touch the ground, so…all my weight was on my shoulders. They’re still sore from it.  I wasn’t given a shower, a phone call, and I wasn’t fed until someone else came down and released me.”

Apparently, only one law enforcement agent released Privette from her excruciating and torturous position, according to her.  “He’s got short, black hair, tan skin, a yellow tie. He wasn’t wearing a uniform, but he let me out and took me to the showers, then put me back in.”

“I would just like to say that the police here in Hathian are vile and heartless. They shouldn’t even be allowed to call themselves police officers because they all break the law themselves. In my opinion, they’re all nothing but hypocrites. Something needs to be done about them. Someone needs to give them a taste of their own medicine,” stated Privette who added that she “..would like to see him stuffed in a trunk and never let out. I would gladly do it myself, but…he’s too big.”

Within the past few weeks since the Chief’s abrupt departure and absence, claims of police brutality have been stepping up and seem to be on the increase with angry citizens seen recently protesting against the police department and threats as well as pig parts being sent to the station. Will Hathian’s police department attempt to address the allegations of abuse and misconduct with the citizens or will it’s police officers and higher ranking seniors continue on regardless  as tensions in the city seem to be recharging after the violence of the protest?