Earlier this week, Reaper prospects attacked a reporter, stealing her bag in a robbery which left her bruised and knocked down to the ground.

The reporter had been standing outside the liquor store Bottom’s Up on Berthier Street when three Caucasian females approached her and pulled out a knife, demanding she hand over her bag.

The reporter managed to pull out pepper spray and was able to spray two of the females after being hit, but the third female was able to tackle her to the ground and punch her. She then handed over her bag and the women left her on the ground before anybody could apprehend them. 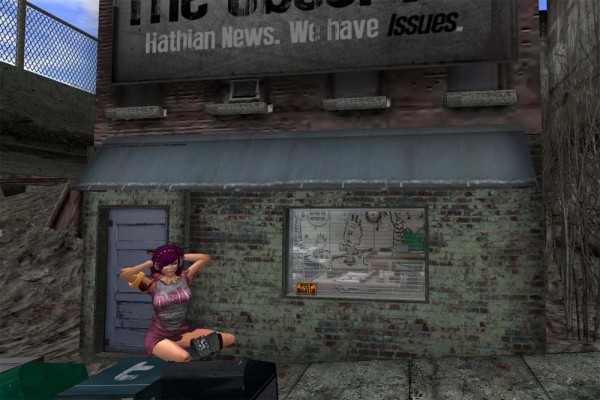 “At the time, I didn’t realize they were Reaper wannabes, but since then I’ve seen them wearing yellow bandanas. I actually confronted one of the girls when she was standing alone by herself but…that was a bad move,” confessed the reporter.

“They’ve hassled the Observer staff going into the office on Bourbon Street and while I’ve had serious problems with Reapers in the past, this was the first time in awhile anything has happened to me personally. First my friend’s liquor store gets hit-and he’s a part time journalist- and now me. I used to think Cymbal, their leader, was some harmless, homeless bum standing around on the street but no, I definitely don’t think that anymore.”

Bourbon Street happens to be where the Hathian Observer office lies and is also self proclaimed “gang turf” of the Reapers.  Robberies on the street seem to be increasing and it might be due down to the increased activities of the Reaper gang.