Respect for the HPD has reached an all time low over on Columtreal Campus in Black Bottom following a spate of blunders, incompetence, and outright unprovoked attacks by HPD Officers.

As an ex Observer reporter and Head of Ella Enterprise, which provides security on CU campus,  I feel the need to respond to the criticisms about not only students, but security staff, following an article about the Gein protest to give the CU Security side of events.

It has not emerged any evidence has come to light about who exactly was behind the attack on the Gein, since masks were worn on most students, and no arrests have been made as far as I know.  I would like to say I was there hired only as personal security, not in my capacity as CU Security, and was not wearing my CU badge. The protest started peacefully, until HPD showed up almost immediately, firstly harrassing me to leave, then threatening arrest if I ‘did not change in thirty seconds‘.  Needless to say, I was confused, I did not realise I was forbidden to step foot into Hathian in a personal security uniform, or that it was a crime.  I explained to Officer Best, who was the one harrassing me – I was hired as personal security, hired by the students to oversee the peaceful protest, since they had no faith in the HPD.  Best then told me to leave, stating I was ‘impersonating a police officer’. As far as I know, HPD wear black, and have clearly visible HPD badges on display. I was wearing blue, with no such badge, and certainly no gun or tazer.

In my opinion, they did not take kindly to me ‘being in their patch’, highlighting their own incompetence.

This aggrivating behaviour – as students tried to maintain a peaceful protest – stirred up anger and resentment within the assembled students, who then reacted defensively when threatened with arrest, and in the confusion windows were smashed. It is true students went a little ‘haywire’, but this was mainly due to HPD interfering  and antagonising matters.

Prior to this ‘showdown’, it is clear resentment has built up between the HPD and students due to a number of reasons. Firstly, they have not appeared to put manpower into solving a single crime on campus, including the pipe bomb, which injured at least five people, some seriously. This was around the time CU hired Ella Enterprises to increase security, since the HPD appeared to do nothing. Not one person was interviewed following the blast, including myself, also hospitalised along with five other people, and no one brought to justice.

In addition, there was an arson the following week, where the Exit / In Lounge was torched and burned to the ground. Despite asking the HPD if I could conduct my own investigations, my report was halted when five HPD officers showed up on campus, threatening and demanding all my information, and that I had no right trying to solve a crime under their noses – stating that they would take over the incident. Needless to say, nothing happened following this, despite my constant calls to an Officer Modan. It appears the HPD do not like anyone else trying to prevent crime in their patch, yet do nothing to solve any crime on campus.

To top this off and cement a total lack of respect for HPD, two officers appeared on campus almost a week ago, barging into a harmless student pledge task, and tazered three people, including the CU Dean, Dannika Riley, in an unprovoked attack. It appeared when watching EE CCTV footage to be shoot first ask questions later. Both parties involved had stated they were friends when questioned, the fight was over, yet the HPD tazered them both, including the CU Dean who had tried to defend the students, and asked what was happening to warrent this kind of violence from the HPD, especially for something as ridiculous as a pledge task gone wrong.

When a senior member of the HPD arrived on campus later, the two officers involved, rumoured to be named ‘Morpork‘ tried to run off from the scene, until called back by their superior. Students were then amused to see the HPD Officers arguing in public against their superior about who was right. The pair were then publicly humiliated and dressed down in front of a large crowd. The CCTV camera footage backs up this statement of events.

“The HPD has been getting away with far too much for too long. Yes, I do understand the need for authority. I do understand their purpose, but they should not be allowed to walk around like they are Gods among men. Picking and choosing when they actually get off their ass and help those in need. Today it’s tazing innocents, tomorrow someone gets shot. It’s utterly ridiculous.”

The Head of KAPS Fraternity, Hunter M. Perdide, also said about the HPD:

“Well, they conduct themselves like shit, took a harmless pledge task and tazed two friends of mine with out  even attempting to find out what happened. Their all shoot first talk later, in my oppinion their not real cops,  their just playing law and order.”

This is intended to put forward CU security, student, and staff views about recent treatment at the hands of the HPD, and help explain the sad turn of events surrounding the Gein violent protest. I also wish to make it clear when it became obvious the protest had turned into a riot, I instructed the students to leave and tried to calm the incident down, not support it, since I do not promote mindless violence.

“I think CU campus has its own security needs which are unique to CU, and that Lexi Ella’s campus security are the ideal solution – allowing the Hathian Police to focus on the real crime in Hathian, safe in the knowledge that campus is in good hands.”

I am willing to respect and work with the HPD, if they start cooperating back, but trust and respect need to be gained with the CU community. 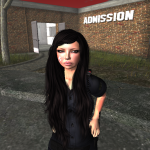 Judgment Day Is Here! And You’re To Blame!

by Cadence St. Clare Are Hathians paying the ultimate price for their sins? You know I…

by Girl Behind the Lens – Daiyu Tang Hathian gets it own ‘Joker’ Readers, GBTL here and…

by Girl Behind the Lens – Daiyu Tang Dear readers, Daiyu Tang here with a profile of…

Hypocrisy of LGBT! Who’s the Real Homophobic One?

by Cadence St Clare ((From the character’s player: GIVEN THE EVENTS THAT HAVE HAPPENED RECENTLY WITH…