Ellis Millet arrested for the murder of Adriana Gambino at her memorial service. 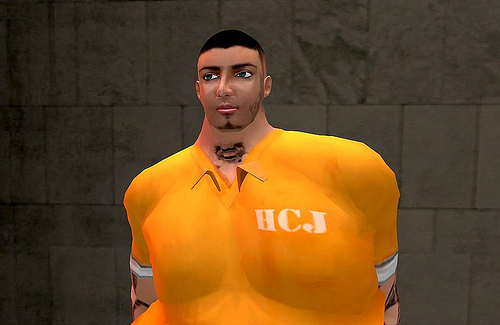 Adriana Gambino, the victim of homicide some time ago, may finally find some peace in the afterlife. Ellis Millet was arrested for first degree murder on August 31st, 2011 at the memorial service of the victim. He was allegedly intoxicated and demanding to see the body to make sure she was dead. If that doesn’t prove he’s guilty, then one would wonder what would!

Millet was hauled off the floor by the HPD after the victim’s sister, Shadoe Rhiadra, called the police stating that he was drunk and causing a public disturbance at the victim’s funeral. He was at that point also arrested for the murder of Adriana Gambino.

The other suspect, Aisling Markus, was undoubtedly proven innocent due to her being physically incapacitated. Her arms at the time were nearly completely unusable.  This begs the question of whether or not Millet had tried to pin the murder on her by carving into the victim. This is merely speculation and will hopefully be investigated deeper by the Hathian Police Department.

The odds are not in favor of Millet. Sometime before the murder of Adriana Gambino, he was arrested for the murder in second degree of a woman named Chelsea LeSure. He had brought her corpse into the hospital and was stopped before he could just leave it there.  It was revealed in the autopsy that she was stabbed in the abdomen and had the name “Ellis” carved into her chest, some of it done after her initial death. In an ironic twist, the cause of death was the lethal injection of cyanide. He was taken for questioning by the HPD and he confessed to the murder. He was sentenced to 120 hours and released on parole.

Now, in this murder, he was trying to blame a handicapped person and trying to claim to be blind when clearly he was not. The mind of a madman is in the works here. One could only hope that the HPD won’t take his psychological disturbances lightly and make sure he is kept from society and receive a thorough psychological analysis.

The good news is that this case can be closed and the family and friends of Adriana Gambino can be at ease knowing that the murderer is behind bars.