It has been a deadly weekend for Hathian.

On Sunday, the 10th of April, not one, but two bodies were found on opposite ends of the town.

In front of the Super Chopsticks on the east side of town was a John Doe. Reported at about five in the evening, probie Gao Li arrived on scene to retrieve the dead body.

The victim is a young, black male. The words ‘Hell’s Saints’ were carved into his forehead, and the cause of death is suspected to be a slit throat. For now, no suspect was apprehended, and an investigation is currently taking place.

Only minutes later, on the other side of town in front of the HPD, the body of an unknown, white female was found.

“I almost tripped on this disembowelled corpse, right here, in front of the police station.” says paramedic Andrea Mizser, who found the body. “I have seen blood before, but not like this in broad daylight two meters away from the police station. I don’t even feel safe walking in daylight now.”

The body was much more mutilated than the black male found earlier. Both hands and feet were missing, as well as her head and a patch 12 inch by 12 inch patch of skin on her back, and all the skin on the front of her body. Not only were her organs no where to be found, but a mysterious marking was found under the woman’s left breast. A pair of lips was carved into her skin. Whether these were left by the criminal, or were a previous injury is not known.

A few questions remain; are these crimes connected? Are the Hell’s Saints to blame? Was this another case of Buffy the Vampire Slayer? Or maybe the reincarnation of the Rejects are the assailants? Will the police ever do a better job of keeping the citizens of this seemingly forsaken city safe?

Both suspects are still at large, and the residents of Hathian should be on guard. 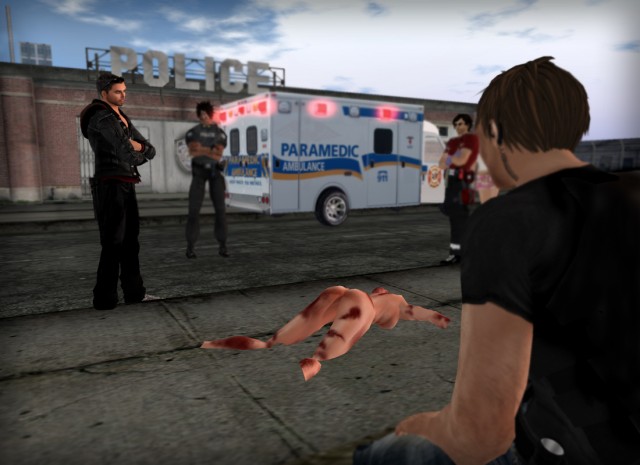 Abandoned Pawn Shop up in Flames