Death swung the bloody ax tonight out by the Old Hathian Church yard, by way of Hathian Police Captain Hendrich Andel’s foot, as monstrous serial killer Harley Riler, known as the Headless Harvester, was hanged just before sunset. A large crowd gathered to see the spectacle; some appearing in black in respect of the woman, some in plain clothes, while others came in uniform, as most of the HPD force turned out to see justice served.

After a brief walk up to the platform, and some jeering from the crowd, the damned was able to give her final words… words she spent predictably cursing those who condemned her & promising nightmares to come. The Captain then rehashed her sentencing, and swiftly kicked the woman towards the opening, a loud crack streaking through spectators’ ears that mixed in with cries of despair from the few friends who had come to cut the woman down. Hathian’s oldest form of capital punishment didn’t settle even with the judge who presided over the case. “That was horrible. I’ve seen a lot of violence and death since coming to live here in Hathian. But that hanging was absolutely medieval,” said Greenlee Morrissey, lawyer & manager of Slim Goodie’s Diner. “My hands were tied with the way the statute was written, and I had no choice but to sentence her that way. The City Council and the Louisiana State Legislature have got to fix the way the death penalty is currently written in Hathian so as to avoid anyone ever witnessing this kind of torture in the future. Because this, this was just…wrong.” 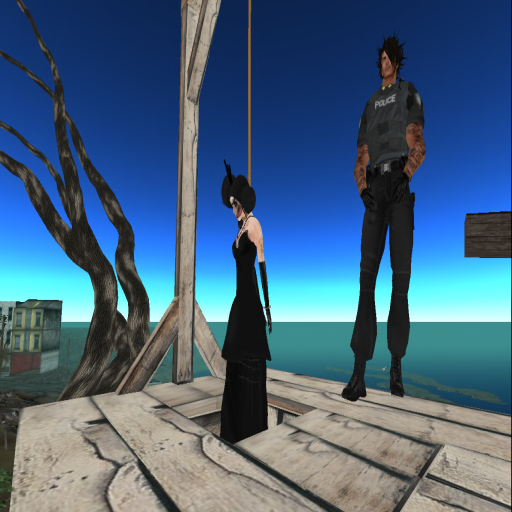 And much like Riler’s trial, chaos soon broke out, as an unnamed woman attacked one of the officers nearby, Sgt. Detective Dax Carver, known now to be highly connected & romantically involved with the criminal. The remaining officers moved to control the attacker & the crowd, while local Hathian General Senior Physician Lake Gavilan removed and prepared the body for exit.