On 16th August a peaceful, scorching Hathian afternoon was disrupted.

Your intrepid and bold teen reporter was about to get her usual cup of Twinings and a sugary donut when just ahead of her, a masked gang member entered the Grind. They pointed a cute adorable and deadly pink gun at members of the Hathian Police Department. Your reporter’s resourcefulness and bravery got all this on camera.

One masked Koga opened fire at Officer Cade Morgan, but his quick thinking evaded the bullet.

A second gang member already in the Grind assaulted another female officer, Ryan Savage, with a tire iron. The two tussled and fought.

Officer Jimmy Goldstein cowered and hid as is his modus operandi.

Finally with the backup of officers, Lizzie Zero and Porkins Jr., the suspects were subdued and arrested.

Identified as two members of the Kogarashi gang, they were sending a message to the Hathian Police Department; “Tell Jax we have a message for her. We will not stop until they produce Cali or prove she left HPD.” 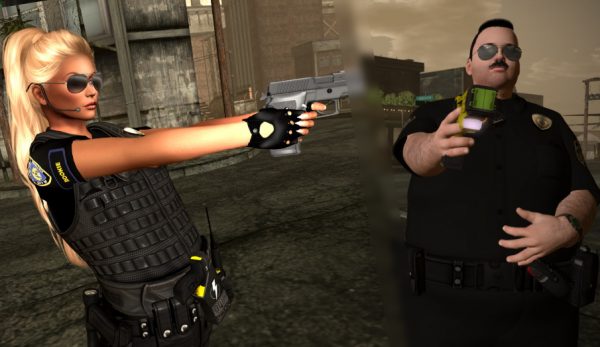 With bullets flying, its a miracle no-one including me was seriously hurt. One innocent bystander managed to live and got a free breakfast muffin, but Officer Goldstein whilst trying to flee the scene in a cowardly manner took a bullet in the bottom!

The gang members have been arrested but is this only the start of a new wave of attacks from Hathian’s notorious gang?

Adamant Stars Wants You on the Casting Couch