In the early morning of July 10th, Downfall and company departed Hathian and traveled down the Mississippi River Gulf Outlet Canal to a retired marine station in Bay La Fourche. They arrived within the early afternoon and immediately set up camp. Pop-up tents were anchored adrift on the water between floating wooden platforms. One platform serves as a maintenance garage with fishing tools and nautical equipment. The other, a bare platform which was utilized to hold a grill and camping supplies. 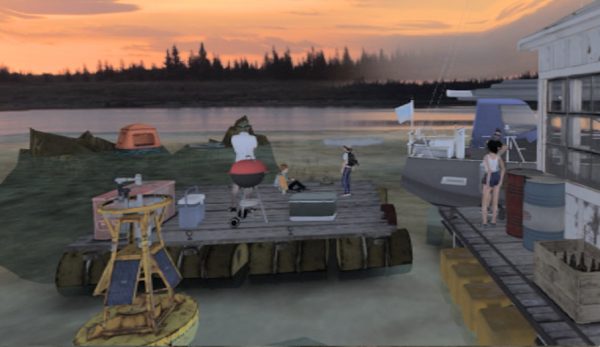 Children remained supervised as they swam within the bay, fished off platforms, and socialized with one another between tents and the boat.

The primary lesson of the day focused upon survival, both out in the wilderness and Hathian itself. Topics include fishing, fire safety, preparedness, and nutrition.

At nightfall, the Seaside crew experienced unaccounted guests! Far off downstream a boat silently drifts upon the water. It does not approach and remains its distance. Soon, the silence breaks with gunfire and the sounds of police in pursuit. The unknown visitors sped away opposite the direction of camp. No children came close to the scene.

After an eventful night, students rise from a sleep that lasts until the later afternoon. At this time, Downfall was napping on a fishing boat. Welders and Barnes maintained watch.

One student took the opportunity for a good spirited prank upon Downfall. Under the supervision of Welders, she paints Downfall’s hands with shaving cream and his face with honey. Armed with feathers, the two attempt to provoke Downfall to touch and soil his face. He however does not stir.

The child and Welders to let down their resolve. With a kick to Downfall’s vessel, Welders sends him to drift downriver. In the absence of Seaside’s principal, Welders appoints himself as captain and the children his crew. Together they role-play as pirates.

Their first act is to declare mutiny against their former captain. Their second is to find his treasure. In a competition to find snacks and other goodies, the children search the boat’s cabin. Just as Downfall returns, students line up with arms full of a few personal possessions and candy. As a reward for finding chocolates and marshmallows, students received a treat of s’mores just before bed.

With the dawn of Sunday morning, Seaside packed in their campsite and returned to Hathian.

Dip Your Pen Into the Devil’s Inkwell