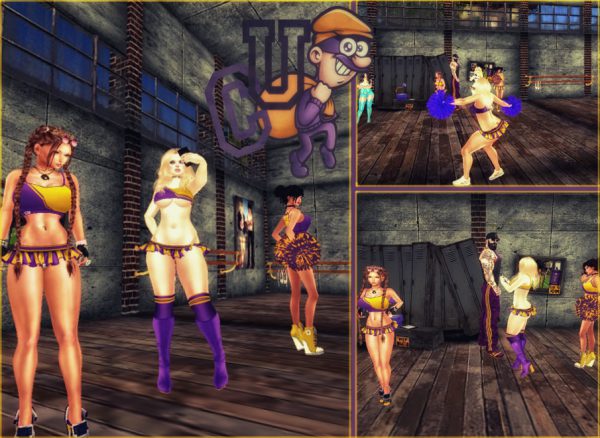 I entered the gymnasium attempting to be as discrete as possible so as not to disrupt the flow of events happening, only to have a beautiful bubbling blonde sophomore named Ariana Scarlet immediately point out that my nipples were hard and “could cut glass”! Yes well, like all red blooded American’s what can I say? I love to see pretty girls in short skirts bopping around and shaking their pompoms!

As many of you know, last year the CU girls brought home the first place trophy at nationals in Dallas under coach Lisa Sagan, and then captain, Buffy-Ella Millet. Millet has since, tragically passed, but her memory lives on in the courage and enthusiasm of her team. Newly appointed coach, Alexei Kuznetsov, has replaced Sagan, famed for his Silver Medal win at the Olympics for the Russians in wrestling several years ago. A large and imposing man, he nonetheless seems very capable and up for the challenge of leading these ladies to a new victory in the upcoming months! A new captain has yet to be determined. In the mean time Lara Windsor, a studious freshman at CU, with a keen eye for detail and adorable posh British accent, took the lead in try-outs, organizing recruits while Scarlet filmed, and Baily Rose, a second year medical student at the university, lent moral support.

“Spirit is everything.” Rose informed me, “Without it how does one find the motivation to band together and overcome the forces of evil?!” That is indeed the question.

First up was freshman, Clover a seasoned gymnast with 10 years of experience and a bright, cheerful personality. She showed off her skills with many thrilling flips, and a short impromptu cheer for the Looters! “I am trying out today for the first time. I am nervous and excited to get involved here at CU.” She relayed with giddiness. “I love to cheer on my home team, and be part of a squad. It is like a family. I love positive and happy people. Cheerleaders are athletic and spirited. That’s my ‘tribe’.”

Second was a southern belle, Layla Giovani, also a freshman, a girl who showed us more than just spirit! It seems the lovely lady, undoubtedly in her nervous jitters, forgot a very important part of her uniform! The panties! Her bubbling zest and charming personality paled in comparison to her high kick and splits she dazzled us with. I must say more than anything I admired the young woman’s mastery at ladyscaping. Her garden was a lovely little heart shaped bush, the same carpeting color as her bobbing blonde curls, in case you weren’t sure those drapes were real. When asked her favorite thing about being a cheerleader she replied, “Well..” followed by a dramatic brush back of her hair and smacking herself in the face with her pompoms, a vacant expression overcoming her bright eyes as she had already forgotten the question, only then to recount, “Oh! I love showing team spirit and motivating our team on to victory. But of course the uniform is great and dating all the hot guys!”

Last, but not least, was Park Ji Soo, a South Korean freshman studying here at CU. Park, a seemingly modest, polite and shy girl with no previous cheer experience, she did however, offer a background in dancing. She impressed the crowd not only with her own hip wiggling skills, but also with those of her service animal, a pudgy little piglet named Beikeon. Beikeon enjoys sniffing things, shaking his money maker and following his owner around dutifully.

Congratulations to these new recruits, for making the team, yes, even Beikeon. Do they all have what it takes to make nationals? I believe Giovani said it best when asked how important was team spirit. “Oh very! I think it’s what brings success and encouragement to each member of the team. Without a cheerleader, there is no pyramid and without a pyramid there is flat nothing.” A statement I believe, with a magnitude that was completely by accident and left the poor thing as stumped as I was on where it’d come from.

Scarlet was able to give some great advice for students hoping to try out but still trying to muster up the nerve. “Just enjoy dancing, enjoy shouting and come to a tryout. If we see that you are passionate about it and not a lost cause, there is a chance that you can join the squad. So just pay us a visit and shout “GOOO LOOOOTERS!”” And as Windsor points out, “Only try out if you are dedicated.” 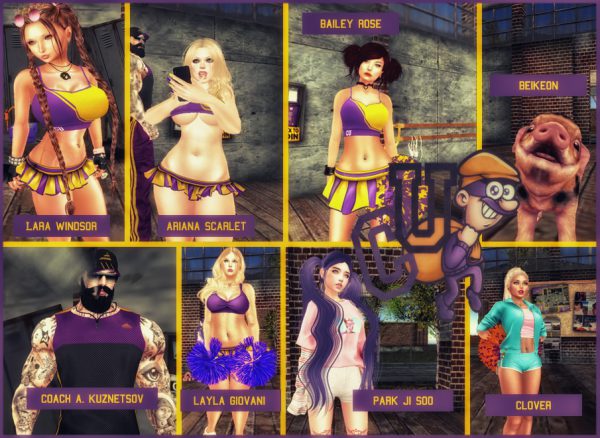 Whispers from the streets of Hathian – Introduction