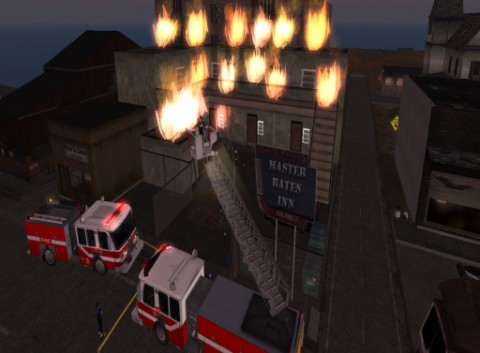 HATHIAN – Residents looked on in horror yesterday as well-known Hathian landmark, The Master Bates Inn, went up in flames. The fire, which started around 13:15 SLT on Saturday, roared fiercely for around an hour before finally, being brought under control by a contingent from FDH who arrived on the scene within 15 minutes of the blaze starting.

There were no casualties in the blaze, but extensive damage to the motel is likely to put it out of action for some time, a significant blow for owner Jacinda Spyker after the Inn was flooded last month.

There is speculation that the fire may be an arson attack, the latest crime in a string of incidents between members of formally-friendly gangs, the Aces and the Rejects. Fire investigation continues.