The street was closed off the entire day for a setup of picnic tables, a full fire grill, beer stand, patriotic banners, and a tent stage.

Beach Bums, a local beach and classic rock cover band, played beneath the canopy. Domino Starr, Comiquitees proprietor, took over the stage around noon to sing and play an acoustic guitar. Her rendition of Sam Hunt’s, “Breakup In a Small Town” deeply resonated among a few members of the audience.

Costumes were encouraged. Among attendees dressed for the occasion, villains from the pages of DC comics were popular. Much to the lament of 24 Hour Pawn owner, Brandie Kelly, no one arrived as Captain America. 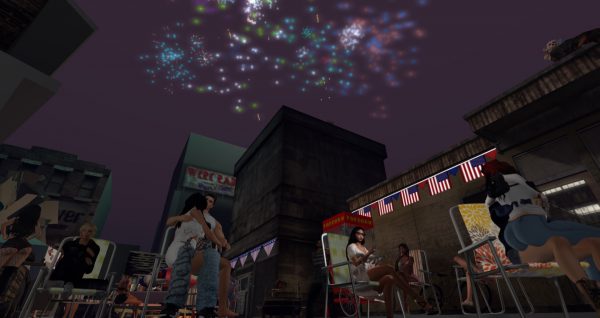 At 7:00 PM, fireworks were launched from atop a nearby derelict building. Explosions and dazzling lights filled the air for nearly an hour. For the show’s last ten minute finale, a barrage of light and color overcame the evening’s cloudy skies.

The Poison Apple is Hiring!