Hathian celebrated its fifth Pride festival over the last weekend of June.

On the evening of Friday, June 26th, club owner Khloe Reignz and manager Valmont Marselle opened Vice City’s doors. Patrons dressed down and up stormed their way in. Nearly naked bodies doused in body paint, wings, and eclectic attire filtered their way through the entrance down to the dance floor. There they danced the night away to a stunning mix of music dropped by DJ Hannya.

The festival began at noon with a parade around the park. DJ Vicus played remixed music over the WKRK airwaves. On a rainbow float, driven by local celebrity and Hathian Theater owner David Pink, parade goers danced and threw beaded necklaces to people watching from the street. Pink experienced numerous troubles winding through the narrow passages of stalls and people, leading to several impacts. No one was harmed during the parade, but several stalls and street lights received minimal damage. Pink’s mother, the notorious BeBe Pink, offered to pay for the damages.

Over the next several hours people flocked to booths offering promotional items and food from businesses, municipal networks, and education services from all across Hathian. In total, 40 establishments were counted present.

A full day of activity was planned for everyone big and small. On one corner, carnival games were available to play; several of which were granted to the festival by Pie Hole, Hathian Tap House, and Messina Real Estates owner Sofia Vyper. Among the most popular games was the riding bull. Tara Spanos, Elseworth Taov-Pink, Joanne Steel, and David Pink earned top scores. Hathian Observer founder, Geoffrey Welders, earned the top time clocking in with 28.05 seconds on the bull.

Seaside celebrated Pride with a water balloon fight hosted by Jason Downfall. From all corners children pelted each other and hapless victims wet and wild. No where was safe, not even the skies above; as a ziplining child dropped ammunition down a side street of the park.

DJ Hannya took over the stage at 2:00 PM. Hannya played a mix of oldies and classic songs celebrated by the LGBT+ community.

At 3:00 PM the Drag Race Marathon was announced. Runners, donning wigs and heels donated by David Pink, raced through the District 8 streets. The first to finish was Elseworth Taov-Pink with a clear lead.

David Pink, fresh from the marathon, took a turn spinning tracks in the DJ booth at 4:00 PM. Popular dance remixes from top 40 songs and influential gay icons blared from the stage speakers.

The Reading Challenge, a tradition of exchanging playful insults, began at 6:00 PM. The event opened with a quote from the late drag queen Dorian Corey, in the 1990 documentary ‘Paris is Burning’.

Corey described reading as, “You get in a smart crack and everyone laughs and kikis because you’ve found a flaw and exaggerated it, then you’ve got a good read going.”

Between the stage and ground, Welders and Pink exchanged banter. Flaws regarding age, height, and recent lack of intimate partners were harped upon.

As evening set around 6:00 PM, DJ Kira took command of the radio station. From the floating DJ booth above the stage, she played hip hop music that drove the crowd into a frenzy of booty shaking. Twerkers were found all across the street for as far as the eye can see.

When the last of the DJs finished at 7:00 PM, live musicians from RIZE take turns performing for the remaining audience. Emily Rose, violinist, played while storming around with her choreographed dance moves. Tala Colletti followed as a singing solo act with a rousing cover of Billie Eilish’s ‘Everything I Wanted’. Local band, Wicked in the Bayou, gave the final show with a full production of musicians and dancers spanning across the entire stage. 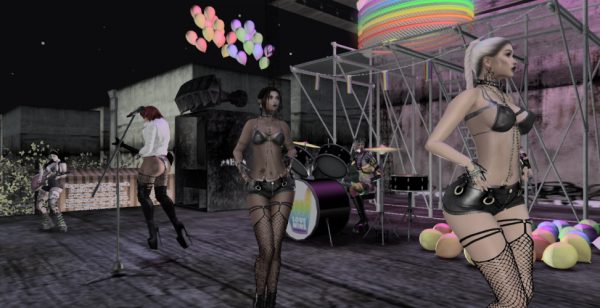 Night completely fell upon the park and yet the festival continued on. Through the last of the performances and until around midnight fireworks, provided by Sofia Vyper, exploded among the stars. Hathian Pride ended not with silence, but with a bang.