Violence ensues over an elaborate overreaction by two allegedly ‘important’ celebrity figures. The victim, a new resident, would not reveal his name; instead, we refer to him as Marty.

Marty is a nineteen year old photographer fresh off the bus as of January 26th. The event takes place on the 27th where Bourbon St. and Hathian HWY meet beside The Slab Butchery. After ensuring the press is documenting his story, Marty agrees to an interview in his apartment.

“I’ve been aggressively approached before but I didn’t know such a thing really happened. Sometimes you just forget that there are bad people out there and are ready to hurt you. What happened was, I had been sitting on the bench nearly dozing off. I had just taken a break while looking for a shot. My work is real-time life as it’s happening. I was disturbed from my daze when these three ladies seemed to be bickering about something, but I wasn’t paying too much attention. So I snapped an image of them, of course planning to blur the imagine appropriately; but now I don’t need to. When they noticed the picture I took, they both approached very intimidatingly requesting my camera. I tried to defuse the situation without it coming to blows but they were intent on grabbing at it. The one featured in the image, with latte colored skin, struck me with a headbutt and tried to steal my camera. But I was smart. Break away cords saved my bacon and I took off after nearly falling face first in the street. I would have fought back, but there was two of them and I’m not the biggest guy.” 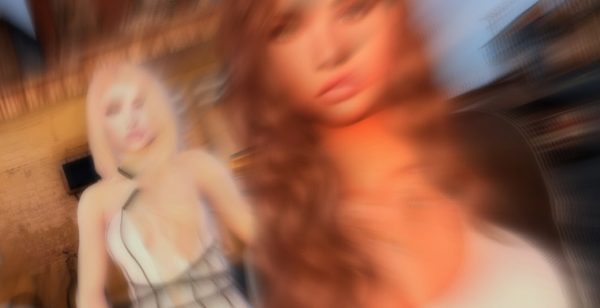 Without knowing for sure who they are, Marty chooses to postpone pressing charges. The two remain unknown, but the above image captures the assailants moments before the assault.

Marty comments he is not going to let that scare him away, and is sure to warn anyone that self-defense is very important.