THE CITY OF HATHIAN IS ON A TILT, NOW FIXED AS CROOKED AS HIS CROOKED SMILE, FOR THE CITY HAS LOST ONE OF ITS PARTS – DEKLAN RAVENHEART.

Deklan Ravenheart passed away peacefully on November 9th, 2019, leaving behind his children, widow, family and friends, and a host of other citizens whom Deklan had touched in some way, at the very least, they had shaken his calloused hand and witnessed that crooked smile.

Perhaps this reporter has no right to write about this man, having known him only a short while, but the echoes through the streets paint a detailed and layered picture of a man who indeed had an impact on everyone he crossed paths with.

Any soul who has lived a great life has had many lives within that life, and this rings true for Deklan Ravenheart. Well-known for his days as an integral part of the local Orcus Samedi Motorcycle Club, aka OSMC, and by his biker name ‘Tic‘; Deklan, in these times, was sometimes cast in an infamous light – but that will not be detailed in this article… as it is a life that he left behind before he left this world.

It is possibly coincidental yet resounding that the symbol of the raven is often associated with grief and loss, though the more inherent meaning teaches us prophecy, insight, and an urge to act and not procrastinate. The raven is a master of time. 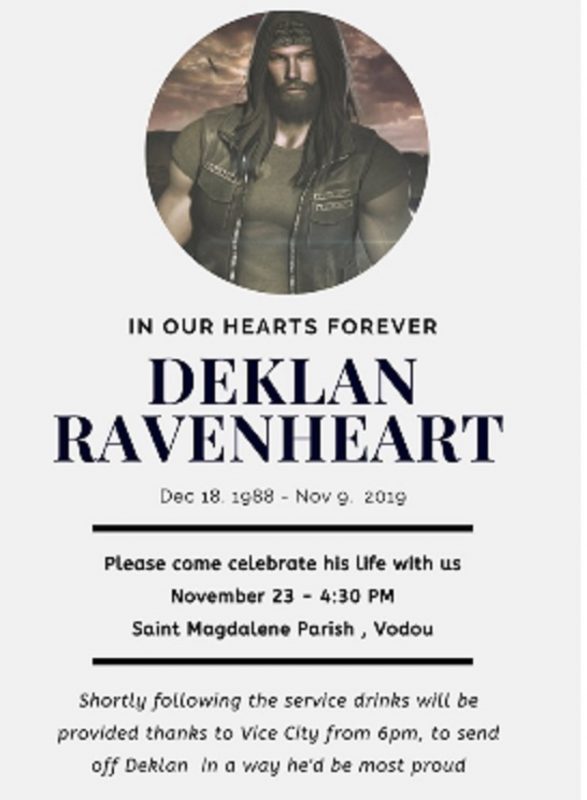 This rings true for anyone who had ever worked with Ravenheart. His last days were spent running Hathian Motors, and what a tight ship he ran. Every job, every order, every customer was treated with importance and attended to in a timely manner.

His very presence was resounding. One word to describe Deklan Ravenheart: integrity. That is true for anyone who knew him – whether they knew him for years or just met him once. He took no nonsense from anyone, and his very being said, ‘I know. Do you?’ – even when faced with memory loss. He had that thing, that instant likable energy that made you want to learn from him.

Anyone who really knew Ravenheart also understood that time is memory, and what time we lose when memory is lost. This reporter cannot comment much on what he and those close to him went through, but can relate to what it is like to not remember. It is like a black curtain in your mind, that you cannot open, you cannot reach. It is the single most frightening state to be in, though at times, one understands that the curtain is there to protect you from your demons.

Deklan can be quoted saying (and I am paraphrasing): maybe there is a reason not to remember, because we want to forget the worst. However, word on the street is, he remembered before he left. He remembered. He remembered all of it. And he took those memories with him, peacefully. And that, Hathian, that is the RAVEN HEART.  Life is about action, about foretelling based on the past, based on what we have learnt, based on what we have felt. We step through each day like it is a new room, a new level, a new battle – and we succeed based on having learnt from what we have already been through – the good, the bad and the ugly.

Deklan once taught one of his mechanics in training: The valve body is like the heart of a transmission. First remove the valve cover, then take all valves out at same time because sometimes they fall, and are hard to get.

Deklan Ravenheart will be dearly missed. He was going to teach this reporter how to fix cars, and finish the teachings of whoever started it  – because this reporter sure as hell cannot remember who that was.