This week’s episode of Dance Battle Royale was another superior match up! Lilian Brinner and Clara Van Louten! One a professional ballet dancer, the other a hip hop dancer dancing to Taki Taki by DJ Snake!

Lilian has the advantage of her long, slender limbs to lend elegance to her movements, making each sweep of her arm or step of her legs seem to be so much more deliberate with less effort. In the case of Clara, however, the smaller girl has curves to use that gives her dance moves a certain appeal.

An interesting contrast, the pair’s wardrobe played off each other. While Lilian was decked out in black or other dark colors, Clara opposed her in bright colors. The effect visually offers the suggestion of Light versus Dark, good versus evil.

With each round of dancing, Clara’s moves were expertly performed, and yet Lilian’s performance was entrancing. Watching her move was almost hypnotic. Her pop and lock movements had the perfect amount of snap and she flowed fluidly from one move to the next.

If you haven’t had the chance to catch the last episode, NBCD offers it for streaming on demand [here!]  Please watch it before continuing to read this article as spoilers are listed below!

Unfortunately, neither dancer was available for comment following the filming of this episode, however the voting tells the tale of the audience’s favorites! With 70% of the votes, it’s clear to see whom the favorite was!

Lilian Brinner came out ahead by a landslide, moving her to the next round and eliminating Clara Van Louten. Don’t forget to tune in for the next episode to see the gents battle it out as Beau Nemli goes head to head with Oji Long. That’ll happen Monday, July 8th at 5pm (SLT) on NBCD!

((Please check out @RizeSL on Twitter both for links to the episodes, as well as for the polls to vote for your favorite dancer! Also follow @LoveThatMelody to keep up with articles!)) 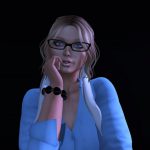