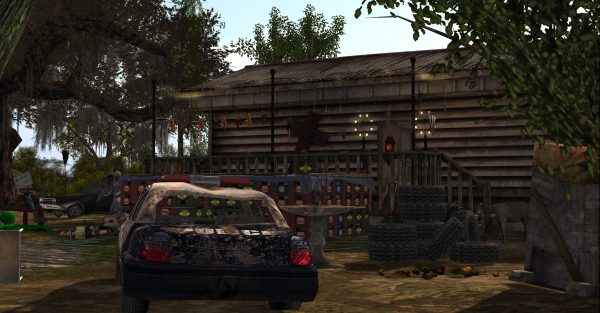 On the evening of August 7, 2018, at around 8 p.m., Peninnah Aisley entered the home of her ex-husband, Jess Corven, demanding to see their twin infants, of which Corven currently has legal custody of. Police records indicate that Corven denied Peninnah visitation with the two children due to belief that she had relapsed on drugs and posed a danger to them. Following an altercation between the former spouses, Aisley proceeded to stab Corven multiple times in the kitchen with one of his own kitchen knives, leaving him to bleed out on the floor. Witnesses to the crime included Aisley and Corven’s infant twins, as well as Corven’s two other children, whom were left alone at the crime scene.

Shortly after Corven’s murder, in the nearby bayou of Delphine, Aisley had taken her two kidnapped infants to join two other small children, in a small trailer on her property. Corporal Trevor Pentewyn had been watching the residence he knew Aisley to occupy, eventually finding her home on August 8, 2018, where she proceeded to assault him shortly before he arrested her. During Aisley’s arrest, a second man arrived to the residence, whom we’ve later discovered to be 30-year-old Kiryu Hideyoshi, the suspected patriarch of a crime family known commonly as The Order.

Hideyoshi and Pentewyn exchanged words for some moments outside of the residence before he went inside of the home, reemerging with two sleeping toddlers and placing them into a black sedan and, despite Officer Pentewyn’s discouraging, fled to an unknown destination with them for several hours before returning to what is assumed to be his shared home with Aisley.

Child Protective Services retrieved the Corven twins who were later released to relatives of Corven. Aisley has been charged with first degree murder and two separate counts of kidnapping. This is her third kidnapping charge spanning the past few months; the woman was also charged with kidnapping Paviella Zhao/Adachi in June 2018, but was later released pending a trial. It is currently unknown how many children Peninnah Aisley actually has.

Police are currently looking into a list of open cases involving Hideyoshi while Aisley remains behind bars for her crimes. As of now, it is currently unknown what her bail is being set to, but the city can rest assured, another murderer is now off the streets.

Whispers from the streets of Hathian – violence in Devils Pocket