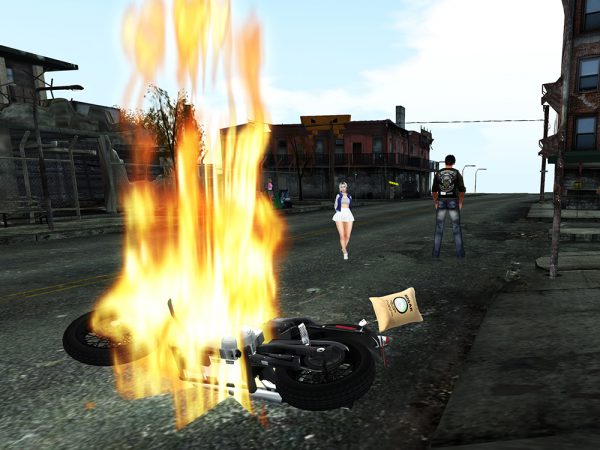 On the 16th of May, around 1pm, Hathian Highway was the host of a rather flamboyant display. Between the Butcher shop and the Pawn shop, a bike was set on fire and left to burn down on the street.

A few bystanders gathered round to witness the spectacle but only one seemed to be aware of what was happening. The man in this picture, snapped during the event, could be heard saying this was not his bike and replied with a “No comment” when approached for questions. He then quickly fled the scene.

The leather vest the man could be seen sporting, so often worn by motorcycle clubs, leaves us wondering if he truly had no connection to the bike. Could this be rivalry between bikers? Or an insurance claim gone wrong? Either way, it seems the man knows more than he lets on and we shall keep you informed as we hear more about it.

Got information you think could be relevant? Drop by our offices behind The Clam and ask for Hyemi ((Avatar name: Esmeralda Siamendes)).