A Columtreal University art student managed to get herself arrested when she was apprehended by two police officers outside Hathian Police Department, spray painting a Banksy art piece [‘Have a Nice Day’] against the exterior of the precinct. 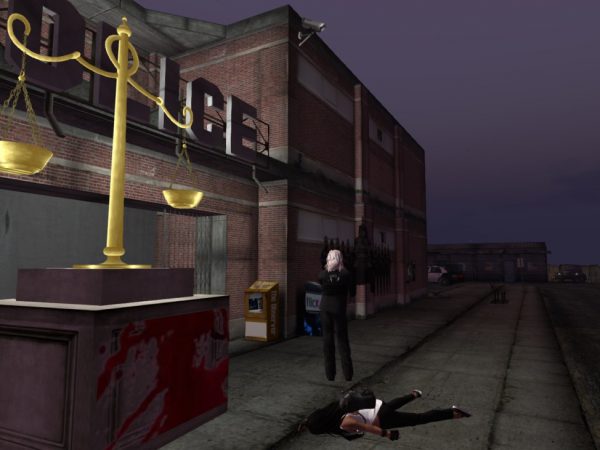 Cece Dufresne, 21, a part time bartender, also deposited a huge statue of the Scales of Justice- covered in blood, blocking the entrance to the station.

Ms Dufresne issued this statement: “It was an art project that I carried out, and yeah, I got busted. One of the cops slammed me into the Scales of Justice statue along the way into the station after arresting me, but I’m not through making statements with art, the HPD aren’t the only institute or target for my next art project.”

The CU Dean declined to comment on the student’s arrest. The HPD were also reached for a comment, but did not respond.

Ms Dufresne added, “The art piece was just meant to provoke the HPD into thinking about justice and how it’s delivered in this city. The blood and Banksy stencil were meant to express how I perceive it being delivered…but y’know, everyone has a different view on the HPD, this is mine. An’ like I said, this was my debut, I’ll be lookin’ at making more statements and carrying out different projects in future, this arrest won’t stop me.”

Millet Turns Self in, Ongoing Feud with Vond-Phoenix