In the quest for answers in unsolved crimes, a source within the Hathian Police Department flopped some files on my desk to look over and see if I could make any sense of them. A recent attack on a female in Hathian sparked my interest, merely because the assailants in the reports were hearing masks and have voice altering devices as well as how detailed and gruesome the crime committed against her had been. It leads me to wonder if her case and another another one are not somehow, linked.

The first complaint, (name withheld) says that the female was abducted, beaten and later taken out to the Bayou at the end of Bourbon Street. The masked males, whom totaled three the victim could recall, then placed her into a coffin with a body that had been mutilated and left to rot. The victim was then given a choice whether or not to save herself by cutting a key out of the stomach of the dead corpse inside of the coffin which was sinking into the ocean at a steady pace. The word, “Sloth” was scrolled upon the wooden coffin making it seems as if more will follow in a series. Why else would the trouble be taken to write it?

The victim was able through sheer will to get herself free of the confines of the coffin with the help of Hathian’s Fire Department. The brutality was shown on her face and the barbarism in the act itself has given some details that say this is not a random attack on Hathian. This was plotted and executed by sick individuals. 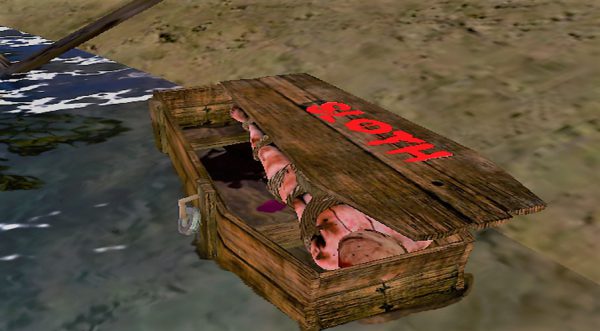 That alone brings me to my second file, of two females (names withheld) who were beaten and left naked with knife wounds inside of a ferris wheel gondola. The gruesome aspect was the fact that this amusement ride car was filled with dead fish and rotting seafood chum.  “Curiosity” was scrolled out in dead fish heads with the ladies left at the very top of the ride to be attacked by seagulls. The report also claims that the men had been masked and they were taken from the Halloween Party and kept for days.

Now ask ask you Hathian, as a new journalist, is this the works of a new generation of violence? Should we be concerned that we might just be stumbling along the path and run into the masked men with an agenda? Or so we await another crime to be committed and hope that maybe… just maybe… it won’t be one of us.