It was like a pyromaniac’s wet dream. On Wednesday afternoon, Rader Records, one of Hathian’s most iconic businesses, erupted into a blazing inferno that torched rare vinyls, vintage guitars and other musical treasures housed within.

As flames engulfed the building, the woefully underfunded Hathian Fire Department’s captain, Dimitri Rousseau, arrived on scene by himself to battle the conflagration. Although rap artist and Rader employee Gene Grimey was present at the scene, the only other people in the vicinity were two or three misfits loitering in the graveyard for reasons unknown. 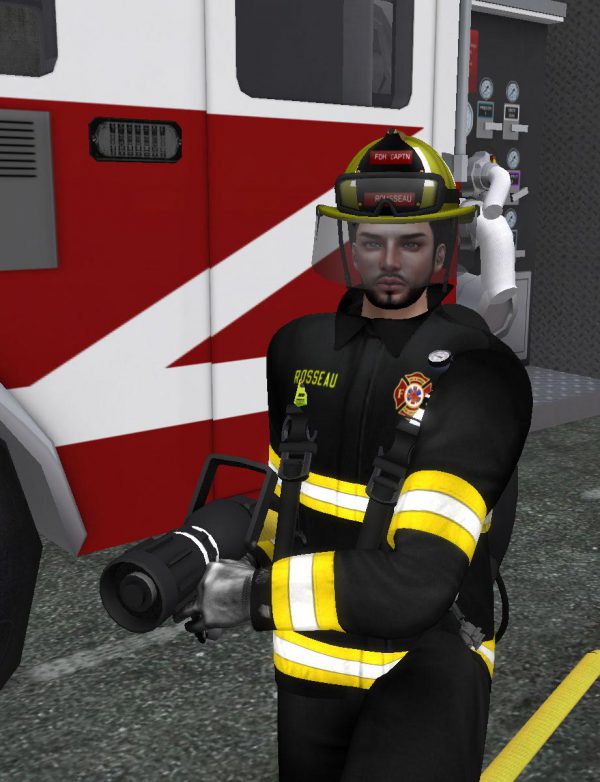 Captain Rousseau, who showed up at  Rader alone to battle the fire.

When interviewed later that day, a Grimy-faced Grimey commented on the strange absence of bystanders, saying, “Usually if someone trips over a rock in the street, you have a huge crowd gathering around. In this case, there was no one on scene … Nobody.”

Even with no backup from other firefighters, who were either out to lunch or not working that day, Captain Rousseau managed to quell the raging fire, but by that point, the north side of the building had suffered significant damage. Fortunately, no lives were lost.

An ensuing investigation by Captain Rousseau uncovered that the fire had been started deliberately using crude incendiary devices known as molotov cocktails. (If Lou’s serves any drinks with a similar name, perhaps Hathian Police Department officers would be wise to start their investigation there.)

According to Perina McGinnis, the owner of Rader, CCTV footage showed three individuals setting fire to the building. As of this writing, no gang, grave digger or organization has come forward to claim responsibility for this dastardly attack. But McGinnis thinks she knows who might be responsible. “I don’t think this is random. I know exactly who might’ve done it,” she said.

Repairs to the store will be covered by insurance payouts and a gift from the Pie Hole, where the owner, Cat Mason, has offered to share part of her pizzeria’s profits to help pay cleanup costs.

For the time being, Rader Records has been boarded up and shut down by order of the Hathian police and fire departments. What does this mean for thousands of music lovers in Hathian? It means that they will temporarily have to put aside their vinyl players and resort to using an obscure technology called the Internet to listen to music.