Since mid-July, an organization called Noir Grim has been putting on fighting events roughly once a month at different locations all over Hathian. These events have apparently been quite popular among certain segments of the population, and for this reason, I ventured out of my usual comfort zone (mingling with polite society) and attended a fighting event that took place last Sunday.

I arrived a few minutes early and used that time to study the other people who had shown up for the event. As expected, I saw quite a few miserable lowlifes, all dressed as if they had walked off the set of a low-budget, post-apocalyptic sci-fi movie. To be fair, not all attendees were freak show material, but a good percentage of them were. 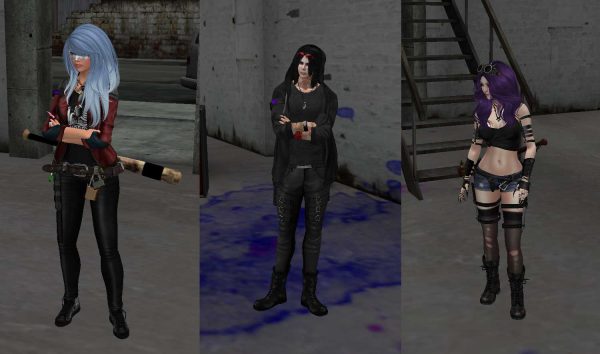 Some of the colorful people at the event. The blue-haired woman (far left) and the black-haired guy (center) appeared to be the event organizers.

By no means was I expecting the Coliseum, but the industrial building where the event took place, called “the Plant,” was just a barren concrete box that left a lot to be desired. Seating was nonexistent, which seemed to suit the spectators just fine since most of them chose to stand anyway. The “ring” was a white circle painted in the center of the room, and inside that circle was a strange symbol that looked like an octopus head or a pac-man ghost.

The one positive thing about the Plant was the powerful sound system, but unfortunately, the blue-haired DJ squandered that resource by blasting unpalatable songs by Papa Roach instead of playing something more uplifting, like “Fight Song” by Rachel Platten.

Only one fight was scheduled for the evening, and it was obvious at the outset that one of the combatants would be a uniformed cop, since he was standing in the ring with his wrists cuffed behind his back.

His opponent was nowhere to be found and did not show up for 30 minutes. This gave me plenty of time to speculate about what sort of mythical figure might make a grand entrance to face the police officer. Would it be Spartacus? Or the Mountain from Game of Thrones?

Not even close. What we got was an underwhelming redhead named Marg. This skinny girl with a deer-in-headlights look certainly didn’t appear to be a fighter by any stretch of the imagination–if anything, she looked more like the Wendy’s girl or perhaps an adult, slutified version of Pippi Longstocking. 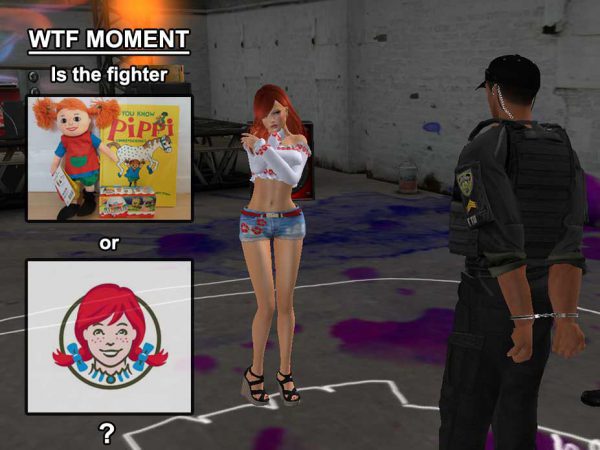 After the redhead was marched into the ring, the blue-haired announcer started introducing the fighters, referring to the cop as “one of HPD’s not so finest, or smartest, or good looking.” She continued to insult the cop for a while, then introduced the redhead, simply calling her “the one and only Marg” and providing no other information about her.

The cop was clearly amused to learn that Marg would be his opponent, and he made a comment about how he’d be happy to provide some “rapey rape.” This remark drew considerable ire from the crowd and wasn’t the smartest move on the part of the cop, but it was almost as if he couldn’t help himself. (I guess a perv is gonna perv, regardless of the situation he is in.)

As the fight was about to commence, Marg began pleading with the event organizers, explaining in a panicky voice that she was pregnant and did not know how to fight. It was clear that she was being coerced into taking part in this brawl, and any decent person would have felt sorry for her. But the rowdy crowd that had gathered that night seemed unmoved, and instead of displaying even a hint of sympathy, they jeered at the girl, calling her a pussy repeatedly while attempting to strong-arm her into fighting.

Fortunately for Marg, another person stepped up and agreed to fight in her stead. To my surprise, this volunteer fighter was Catori, an ex-reporter bully who now sports blond hair and seems to have reformed her ways…

Fortunately for Marg, another person stepped up and agreed to fight in her stead. To my surprise, this volunteer fighter was Catori, an ex-reporter bully who now sports blond hair and seems to have reformed her ways–at least to some extent. (Perhaps my article about her made her rethink her life.) But Catori’s act was not entirely selfless, as she evidently had a score to settle with this cop.

There was also a condition to Catori helping Marg, and this quid-pro-quo became apparent when Catori told Marg that she would owe her a favor. What this favor would be is anyone’s guess. Let’s just hope it doesn’t involve any “rapey rape,” because if it does, Marg will have dodged a bullet, only to come full circle.

While I’ve never been a fan of violence, I have, on occasion, enjoyed watching drunk frat boys fighting at Columtreal University since those kinds of brawls were always highly amusing. This fight, by contrast, was a somber, dismal slugfest that offered no such entertainment value to me.

Once the match started, the two fighters began trading punches and kicks, and this went on for a while. I was starting to fear this brutal tit-for-tat would continue all night, but then, when it almost looked like she might falter, Catori delivered the coup de grace by shoving her hand down the cop’s pants and crushing his nuts. 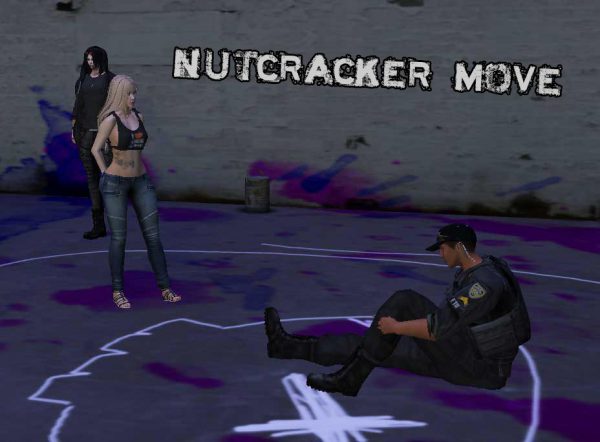 Needless to say, the cop was fairly incapacitated after this nutcracker move and offered little resistance as the blonde opponent smashed a heel into his head. Catori was named the winner of the bout, but it didn’t end there. One of the aforementioned freakish spectators decided an audience participation round was in order and pranced forward gleefully, smashing the cop in the head with a bat even though the fight had been declared over. This gratuitous blow put the cop out of commission and also marked the unofficial end of the event. Shortly thereafter, the spectators began to file out of the building, and based on the bits of conversation I was able to catch, most of them seemed to have enjoyed themselves.

Although this fighting event was not quite as bloody as I was anticipating, it was still an unapologetic celebration of violence mixed in with plenty of surreal moments that made me feel like I was watching a bad “Mad Max” movie. Civilized Hathianites would do well to avoid these unholy spectacles altogether. On the other hand, if you are the type of person who feels right at home in a sea of human garbage, the next Noir Grim fighting event is something you may want to put down on your calendar.

(You can learn more about Noir Grim on Twitter @Noir__Grim .)

Fiona Milton is an investigative reporter who writes about crime, lifestyle and entertainment. To pitch a story to Ms. Milton, visit the Observer office or call 123-4567 (IM: fionamilton resident).
Share this