Car standing—it’s the latest craze to hit the streets of Hathian and at first glance, it seems to be just another way for people to pass the time. But is it really? From the beginning, this bewildering phenomenon has defied explanation. Why would any able-bodied individual with a presumably functional brain waste hours every day standing atop a car?

In an effort to better understand this bizarre new trend, I sought out Sayu Shirokane, one of the earliest and most prominent car standing practitioners in town. Because I had previous dealings with this peculiar, irascible redhead, I was optimistic she would grant me an interview. Unfortunately, when I contacted Shirokane (which I’m pretty sure means sugarcane in Japanese), she brusquely turned down my request.

Not to be deterred, I took to the streets to seek out active car standers on their native turf. But the handful of car standers I ran into were similarly tight-lipped, and some were even openly disdainful. It was slowly becoming apparent to me that car standers had a cavalier attitude and getting them to divulge information was going to be more difficult than I first imagined.

“Maybe we can have a little collection and offer a reward to the first civilian who kicks the crap out of a car stander.”

Turning to social media, I tracked down a known car stander named Candy. As I was trying to engage her in conversation, the queen of car standing herself, Sayu Sugarcane, finally chimed in. Her tweets, while condescending, did shed some light on the whole car standing phenomenon. Acknowledging that it was a way to kill time, she described it as “just a hobby” that was “self-explanatory,” although logically speaking, there was really nothing self-explanatory about it at all.

Hoping to gain additional insights, I turned to the Hathian Police Department. Detective Circe Dionysus had a rather charitable view, and explained that HPD’s strict policy against loitering had most likely forced these less desirable members of society to migrate onto the top of cars, where they can remain visible while avoiding legal trouble. Officer Jackson Crowley, however, was less kind, describing car standers as desperate attention whores who should be ignored, much like “dog poo.” Crowley then offered up a rather intriguing idea, stating, “Maybe we can have a little collection and offer a reward to the first civilian who kicks the crap out of a car stander.” While seemingly harsh, Crowley’s proposal does provide a potential solution should car standing ever become a citywide epidemic.

After speaking with the officers, I left the station thinking I was finally starting to get the full picture. But there was still one last thing I had to do, which was partake in some hardcore car standing myself. Although I was reluctant to degrade myself in such a public manner, I felt it was necessary in order to truly understand what this strange pastime was about. To look the part, I donned unappealing, black attire and equipped myself with a pink, jumbo plastic bat (since car standers have a thing for bats). Then, I proceeded to a popular car standing spot outside the pawn shop and climbed aboard a crusty, old black sedan, where I stood tall despite my reservations. My intent was to put in a solid two hours of car standing. 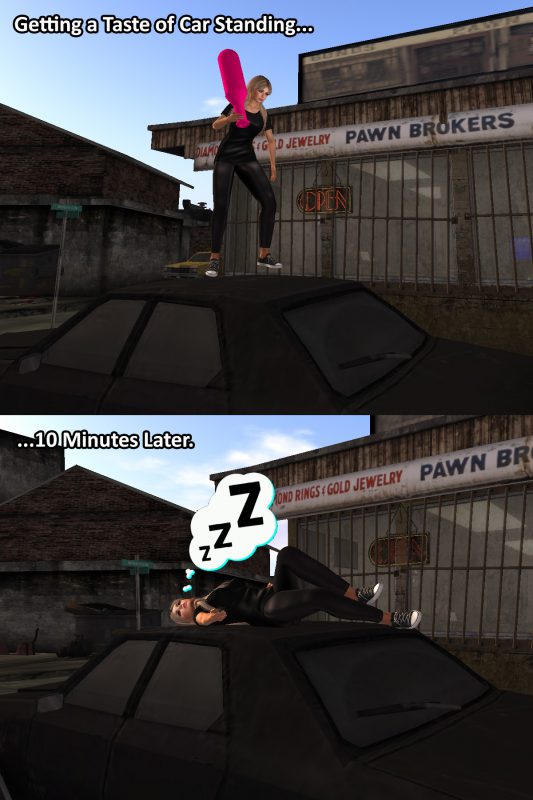 Sadly, my car standing abilities proved to be sub-par. After only 10 minutes, the mind-numbing dullness of this brainless activity was enough to cause me to collapse into a catatonic slumber. When a kind passerby woke me up, I noticed that not only had I drooled over the roof, but my elbow had also caused a small dent. As crappy as the car was, I felt guilty for damaging another person’s vehicle.

Which is why I would like to propose an entirely new hobby: Dumpster standing. Before dismissing this idea outright, consider the benefits. First, you would be well-protected from anti-loitering laws since any cop who sees you would not question your presence and simply assume you are dumpster diving. Second, should you become hungry, you may be able to find a perfectly edible snack tucked away inside the dumpster, eliminating the need to leave your chosen dumpster territory. But most importantly, dumpster standing is socially responsible because it allows you to indulge in your standing fetish without causing harm to someone else’s property.

So there you have it—a civilized alternative to car standing. And should dumpster standing take off (as I imagine it will), becoming the next huge trend in Hathian or even across the country, please do remember to give proper credit to the Observer’s intrepid new reporter, Fiona Milton, for coming up with this brilliant idea. 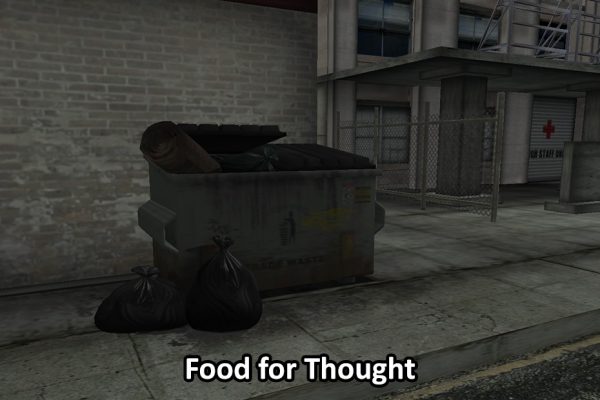 Another Day, Another Body