The mutilated body of an unknown woman has been discovered at the construction site on Hathian Highway. Officers rushed to the scene and cordoned the area off early last Sunday morning, before forensic investigators and a medical examiner arrived.

As onlookers craned their necks to see beyond the crime scene tape, a woman in her mid-twenties lay naked in the dark alleyway. Her chest had been cut open and organs taken. It also appeared that her skull had been sawed into and her brain removed! 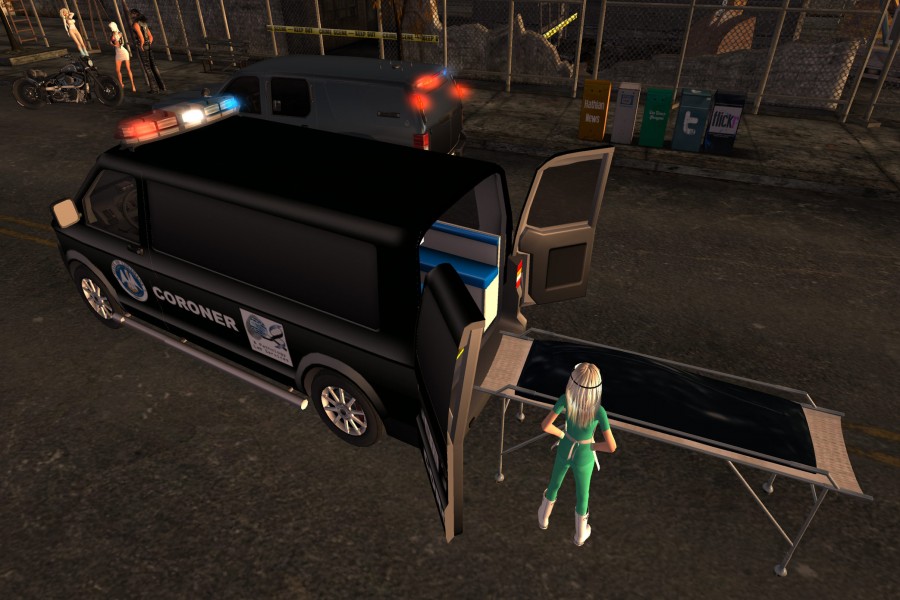 Speaking later about the incident Detective Corporal Jaebus Clave of the HPD said, “We had received a call about a deceased body at the construction yard on Hathian Highway. Examiners are currently conducting a thorough autopsy of the body, but we have no information about the suspect at this time. We cannot say if this suspect had murdered other people as we have yet to find any connections to other murders.”

Officer Mark Thorpe said, “All I know is they found a dead female on the Outlaw’s turf, something about her chest being ripped out.” Asked if the public should fear for their safety from a possible serial killer, Officer Thorpe said; “The public is just as safe as they always are.”

Detective Clave added, “If you have any information about the suspect or what had happened, please visit the HPD police station and get in contact with an officer ASAP. We do not want this suspect to commit another similar crime.”

Are the Outlaws a gang of homicidal bikers or is this the work of a crazed lone serial killer? While the city’s females lose sleep at the thought of more attacks, this gruesome murder is yet another reminder of the violent city we live in and a city council who seem more concerned with legalising weed than grappling with the shocking crime statistics.