City Council Candidate Zipporah Caverly confirmed that she has made it into the second round for the election. The Observer sat down with the candidate and discussed the pressing issues she wished to present to the citizens of Hathian.

Observer: What goals to you wish to achieve if elected?” He asked her, pointing the phone more toward her so she could be heard.

Zipporah Caverly: Well, my goals are to legalize marijuana, improve Seaside Elementary, repair the relationship between HPD and the citizens, clean up the streets be creating a new municipal branch, start up a soup kitchen for the poor and homeless, and cut taxes in half for small businesses.

O: If you legalize pot how do you plan on implementing that?

ZC: I’d like to get it[marijuana] in grocery stores and gas stations like cigarettes, and only available to those who are 18 and up. Do you know how many people smoke weed in this town? Tons. We could make a huge profit from it. Not to mention it would cut down on our jail populations. Weed is a harmless drug. If cigarettes and alcohol are legal, why can’t marijuana be? As a police officer, I see way too many harmless people get arrested just because of marijuana, so it’s something I’m really wanting to do if I get on city council.

O: How do you plan on improving Seaside?”

ZC: I want to raise money for Seaside and give them a better facility, better books, computers, and all that kinds of stuff. I also want to perform background checks on all present and future staff members. I don’t think people really want active felons teaching their children or being the principal of their school.

O: It might be harder to find teachers or principal if you go by that. Staff shortage. Most people in this town have something on their record.

ZC: Hm. Well…now that you’ve brought that up, we could probably allow felons so long as they’ve been rehabilitated and haven’t been arrested in a certain amount of time.

O: Only the non-violent ones or both?

ZC: Yes, only the non-violent ones.

O: You also mentioned repairing the relationship between HPD and the citizens. How do you plan on doing that?

ZC: Well, for one I’d like to do a Christmas with Kids program. I’ve seen police departments all over doing this, where they take the not so fortunate kids to places like Wal-Mart and Toys ‘R Us and buy them Christmas presents. But not only that, this is really going to take effort from both HPD and the citizens. There is a huge divide between them because of past events, but I really believe we can all work together and turn it around.

O: Yeah but is that really going to make Hathian Citizens not get nervous to ask for cop help or trust them?

ZC: Well, it should show the citizens that we are human and that we do care. Most of HPD is really trying to clean up their act.

O: What about this new municipal branch? Can you tell me more about that?

ZC: Hathian is a very dirty city. Just by walking down Bourbon you’ll see that that’s obvious. I want to create a new municipal service that will branch off of waste management, that is specifically for cleaning up the streets and getting rid of ruined buildings. It will create more jobs and make our town look better.

O: Everyone has talked about helping the poor–but is there anything in particular other than a soup kitchen that you wish to mention? Or anything else pertaining to other issues such as cutting taxes for the small businesses?

ZC: Well, the soup kitchen won’t just be for feeding them. Cortalez and I discussed this the other day, and we’d like to turn it into a type of shelter too. Also we’d like to have a wing where people can donate their old clothes, kind of like Goodwill. We haven’t discussed funding yet, but I’m pretty sure the majority of the money will come from fund raisers and donations.

Cutting the taxes for small business is another thing I really want to work on. I’ve said this before, but I own my own little business along side my husband. It is really difficult to keep up sometimes, and I know I’m not the only one. But aside from that, there are a few projects I’d like to do, like make Hathian more handicapped accessible. I also want to fix up that big piece of land in District 8 and turn it into a little park. Right now it’s just a barren open space filled with trash.

O: All of those are great ideas! Is there anything else you want to add?

ZC: Yes, I did in fact make it to the final round. Everyone should vote Rachell Vond-Washborne for mayor, then Perina McGinnis, Inara Shen and myself for council! 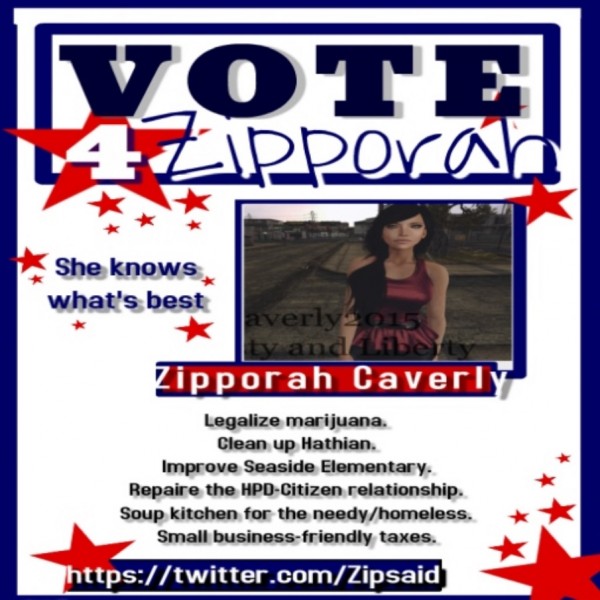