As the first round of voting comes to a close,  Inara Shen, who is running for City Council, agreed to sit down with the Observer and discuss her platform.

Observer: What goals to you wish to achieve if elected?

Inara Shen: I think a lot of the candidates are saying the same things that I want to see too. Like, with everyone saying they want to see improved schools, me saying that too doesn’t really tell you much. But I can say I want to help the city along in the long term. Getting out from under the corruption the former mayor and his council has in place is going to take some time. I have a few specific goals I’d like to see. Better distribution of budget money so the ex mayor’s contractor buddies aren’t the only ones getting jobs is one of them. All the garbage piled up around town kind of proves he had some sub-par people doing city jobs, you know? I think, even if we don’t do something like legalizing and taxing marijuana sales to increase revenue, just being smarter with the existing funds the city has will go a long way.

O: What kind of budget plan would you implement?

IS: I think this town really needs to take some of the ‘crimes’ going on that end up costing the city money, and turning them into new revenue. Like the marijuana thing. So many resources are spent combating it, with the HPD spending time arresting dealers and users of a mostly harmless drug. Sure, they can cite someone if they see them using it in public. I admit, I’ve been cited for smoking a joint outside where a cop was passing by before. But that’s just one citation of hundreds of non-cited joints smoked around the city.

If legalized and taxed the same as cigarettes, marijuana sales could bring in far more money than those few citations – and not require the time of officers to do it. It might even bring in tourists and flood the city with not just a small portion of the money people are spending on marijuana currently, but money from outsiders. The same could be done for prostitution, regulating it to keep those who provide a service people are paying for anyway safer, and profitable. If we do these things, it won’t be a matter of struggling to balance a budget, it will be a matter of deciding which areas of the city to improve first. I’d like to see the hospital funded better, school programs created to benefit our kids, and the abandoned buildings along the shore knocked down and cleaned up.

O: I know this is always brought up but what would you suggest with the refunding of the city?

IS: I’d like to offer people in jail for non violent crimes the ability to forgo more jail time in lieu of helping clean up the city. Like those building demolishing could be accomplished with their help.

O: What would you do for the impoverished people in this town?

IS: When I first go to Hathian, I was homeless. I was lucky enough to make some friends who helped me get a job and prosper. I’ve always wanted to do the same for other people. Since I opened my art gallery a few years ago, I’ve held a lot of charity events at my art gallery for this. There wasn’t much more in my power I could do to help. But if I were elected to city council, I could help budget more of the city’s funds to things like homeless shelters, assist families with lower incomes to afford day care and health care so they’re not trapped in the cycle of not being able to afford to work.

O: What about healthcare? Especially for the lower income families?

IS: Well that’s kind of up to the state and the federal government. The whole health care thing would be beyond city government to provide to everyone, unless taxes were raised a ton and stuff like that. But we could help on a smaller level. I think lower income families’ heath care lacks in the preventative type of care. Presently, they can go to the hospital if they are sick or hurt. But they typically can’t go when they need a simple checkup. I would work to ensure there are paid programs to assist with preventive and maintenance sorts of visits. No one should have to wait until they are sick enough it is an emergency to see a doctor if they need one.

Giving HGH more funding with the proviso that it is to be used for this sort of pro bono care would help everyone who goes to the hospital, whether they’re paying patients or not. Right now I think the hospital has to cut corners across the board to make ends meet. They do a great job, for the most part. Actually I think it’s quite amazing what they can do with the resources provided. They’ve saved my life more than once, without a thought as to if I could pay or not.

O: How will you help small businesses?

IS: There’s not any really big businesses in Hathian. I mean, I don’t see a car manufacturing plant or a Compuware building on the Hathian skyline. I wonder if it’s just something politicians are supposed to say, is ‘we want to help small businesses because we look out for the little guy’? Helping small businesses is the same as helping all residents. I want things to improve for everyone in Hathian. But I do think that businesses should get a bigger tax break so they can afford to make their places safer to work in, supply health insurance to their workers and pay more salary, even.

O: Are there any other issue you want to address?

IS: Well I don’t think any of the candidates have addressed gun control. I believe that responsible people should have access to legal firearms, regardless of a criminal history. We all know how Hathian tends to criminalize trivial actions that can result in convictions. I’ve lived in Communist China. I’ve seen what happens when civilians are prohibited from owning firearms. Along that same vein, I also believe that irresponsible non civilians should not be allowed to carry firearms. I know city legislation can’t really effect that on a big scale, but policies within the HPD and firearms sellers in the city could assist with setting this right.”

The final day of the preliminary vote is March 1st so it is essential to know the candidates. Voting polls are located at the Hathian Police Station, The Civil Services building, and the CU gymnasium. Don’t let your voice be silenced by impassivity. 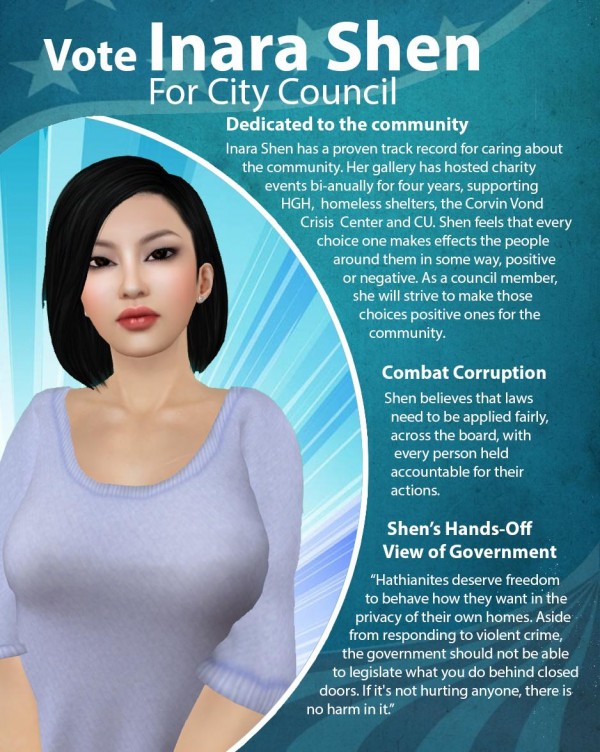 Officer Gunned Down in Hostage Situation