On Saturday, March 29th,Gein Burger was set aflame by Sumfai gang members after an act of vandalism that ended in bloodshed. The cook, Willie, was showing Kirvi Vond the blood-streaked graffiti left by the Sumfai, when Voltiel and Kakihara Henusaki, two of the members, approached.

Vond stated, “Vol goes into the Gein and starts pouring gasoline all over. Willie is outside screaming, along with me, and Kaki just walks up to him and points a gun and him and says, ‘The name is ‘Kakihara Henusaki’ and BAM, Willie’s 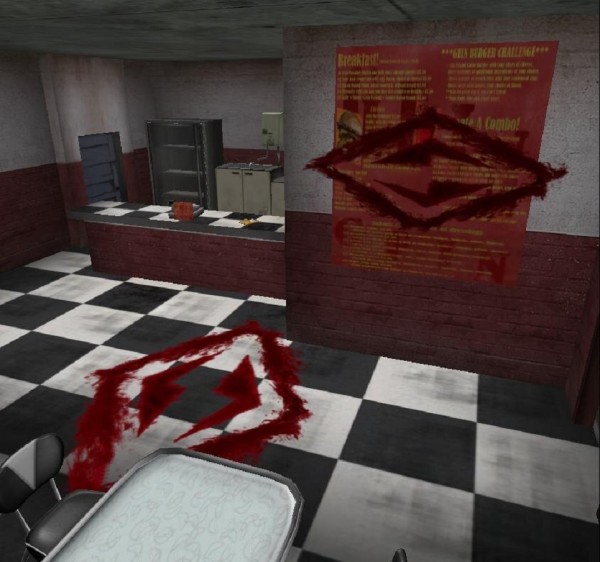 brains are all over the concrete in front of the now burning building. Dead.”

After witnessing the death of the beloved cook, Willie, Vond called 911. Shortly after, the FDH showed up and quickly put out the fire, but not before extensive damage was caused, forcing the popular burger joint to shut down until further notice. Corporal Colton Vond and Officer Kobra Wayne also arrived on the scene and arrested the suspects, who were found watching the Gein Burger burn.  Both were arrested for arson, and the murder of Willie, amongst other charges.

Despite the fact that Kakihara had told Vond that burning the Gein down was a wedding present to Voltiel, this attack remains a gang related attack.

“Sumfai killed him. Sumfai burned the place up,” Vond had insisted. “I’m happy that Vol is finding happiness, but it saddens me deeply that it comes to the expense of burning Gein and hurting me”

While Kakihara and Voltiel Henusaki remain behind bars, other members of the Sumfai gang are free to roam the streets. It was revealed that the gang includes at least two more members, one of them is known only as “Midori”.

If you have any information about this case or the Sumfai gang, contact the HPD immediately.