On September 23rd, during the funeral service for Sunday Herriat, a package was delivered by an unknown male. The stench of the package gained attention by the group of grievers that stood in front of the grave of Sunday Herriat, who was recently murdered by Danni Melodia and Kat Middleton. 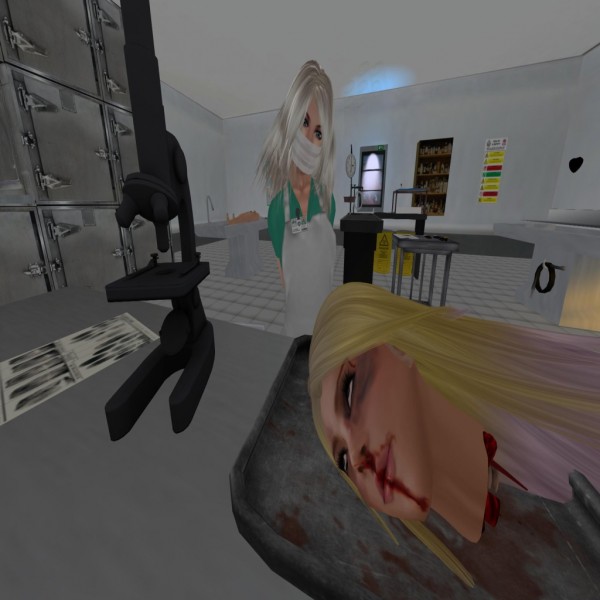 When opened by Detective Skye Weaver, a severed head was revealed. Weaver dropped the head in shock and horror as officers, who were paying their respects, rushed to the scene. A few moved to the severed head, while others rushed after the unknown delivery person.

Found in the mouth of the victim was a note found addressed to Weaver, stating:

“We know what you did to Danni. Drop her back off where you took her from and this will be the only head you receive. If you continue to keep her we will kill more innocent people. This is the only warning we will give you”

The identity of the delivery man as well as the suspects who allegedly beheaded and sent it to Weaver is currently unknown.

Melodia was recently found alive by Detective Skye Weaver while allegedly sitting on a bench. At first Weaver didn’t identify the suspect, but after they engaged in some casual conversation it was revealed that it was Melodia. After a small scuffle, Weaver arrested Melodia and transported her to the HPD station.

Her involvement with the incident at Sunday Herriat’s funeral is unknown at this time.

Sources have revealed to the Hathian Observer that after examination, it became evident that the victim was already dead when decapitated. The suspect had received quite a beating before being brutally strangled by a barbed wire around her neck. The identity of the victim is unable to be revealed at this time.

The HPD are working tirelessly to identify and capture the brutal murderers before another innocent life is taken.

If you have any information pertaining to this case, please contact the HPD immediately.

Ellis and The ‘Pig’ Poisoned? Gimme a Break!