Threatening letters have been sent to both the HPD and passed on to the office of the Hathian Observer, warnings of revenge being taken on the police department over the actions of some of it’s officers and high ranking seniors.

” I will take it upon myself to clean up this town of the unscrupulous police department staff. This is my record. And my legacy is in your hands” states the letter writer.

The letter writer addressed a series of letters to Officer  Kone and reporter Jayda Ferrentino. The first letter warns Officer Kone. “Dear Officer Kone, I have thought about your advice, and have decided to decline. I can no longer refrain from ‘touching your officers’ I warn you simply to keep Officer Steph safe, as she is not. She will disappear in the night sometime very soon, whether she comes back is yet to be seen.”

After some investigating by the Observer we can reveal that the officer the letter writer refers to seems to be Officer Steph Coy, confirmed by an official police report. The first and second letters explicitly threaten Officer Coy. 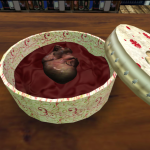 “Dear officer Kone, since our last “meeting” things have changed. And while Steph is still allowed to walk the streets, I can assure you that will not be for much longer.. There are more of you little “officers” I plan on touching, perhaps you find what’s in this box a chilling preview of things to come. You see, if one is heartless perhaps his heart should be removed and used for good. Officer’s Cooper and Stephens fall under this category. Keep an eye on them in coming days, they need to be dealt with.”

With the second letter, a pig’s heart was sent, addressed again to Officer Kone and the warning: “Officer Kone, you ask us to leave your officers alone, but they continue to do horrid things to the citizens in this town. Please, remove the warts of your department, because I am the wart remover.” This letter was signed off Dr Scholls.

The third letter, sent most recently warns against the “rapists of the department.”  A polaroid of a pig’s penis  that was actually sent in a package to the HPD was delivered to the Observer. The package also contained another letter to Officer Kone. “Enclosed is something that many of the male police department need to be lacking as they tend to use it to make themselves feel like men. Your Captain, Stoneage? is his name? from word on the street is a prime example, perhaps the next package could contain his “unit”. Officer, Sergeant Kone, we need to teach them a lesson, Rape is not a way of punishment, nor is it a right. Unfortunately the list of rapists employed by the HPD is too long, one can only go through and take out all the males from the equation.””  This letter was signed -The Cock Blocker. The Observer can reveal that the letters are addressed to Sergeant Kone, according to an anonymous source,  not Officer Bam Kone, with initial confusion over the titles and Kone involved since the letter used both officer and sergeant to address Ram Kone.

The Hathian Observer tried to contact the HPD for a public statement but were told that none would be given and that the matter was “under investigation” and that the HPD were unwilling to endanger any officers lives by revealing any details of the case. In the mean time, the mysterious letter writer is still at large or so it would seem at this moment.

Interview With A Humanist: Humanism In Hathian