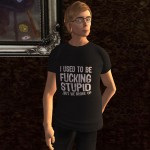 Manager of the local comic shop, The Comiquities, has been missing for nearly two months to the day. The skinny blond man was last seen, according to sources, by a co-worker late Monday night following his release from a brief stay in a care ward at a Hospital outside town. The co-worker to have seen him last made a quote to the HPD that he had suffered a schizophrenic episode and departed stating that he made a mistake and would fix it permanently, with a noose.

With a managerial role at the Comiquities, a lovely and successful fiancee, one teen daughter, one toddler daughter, and two newborn twins; Dustin Chestnut appears to have a great deal to live for in spite of whatever demons might plague him. 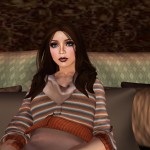 Heather Ray, a well respected Lawyer in the Hathian area, has been left bereft of news and hope since her fiance’s disappearance. Miss Ray has been understandably distraught. A quote from one Hathian Police member states that she should prepare for the fact that Dustin will not be coming home. The usually collected lawyer appears worn and frazzled from her long weeks of worry and distress. Given her household, it’s no wonder Miss Ray has hired a full-time nanny to help care for the children since Dustin’s loss.

When asked what she would say to him, if she had the chance, Miss Ray was quoted as saying, “The same thing I text his phone on a regular basis, without response. That I love him, the kids love him, we all miss him and we’re trying to cling to hope.”

Miss Ray is offering a reward to anyone with information that will lead to Dustin’s return, dead or alive. “I just need to know what to say to his boys when they grow up never knowing their father,” she tells the Observer. If you have any information on Dustin’s whereabouts, please contact miss Heather Ray at 555-555-55555 ((caileighjewel.resident)) or the HPD.