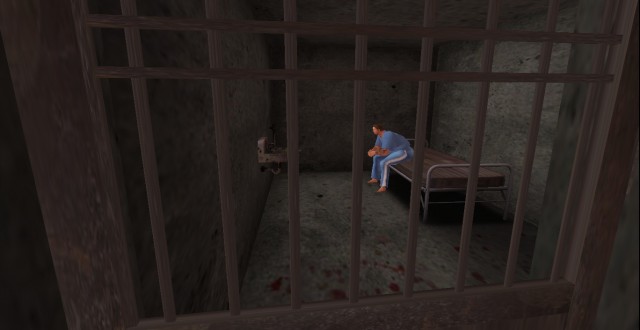 Ellis Millet, 37, who was convicted of First Degree Murder, as well as two counts of attempted murder just one year ago, was released recently due to overcrowding. He was sentenced to three years in Harvey Federal Institution on the precept that he is deemed sane. All three of his convictions were due to the delusional belief of “supernatural creatures”. These were beliefs he shared with the late Buffy Summers, whose accidental death seemed to have sent Millet over the edge. This was said to have been the reasoning behind his murder of Alyssa Royce. He claimed, as per Jayda’s article at the time of the murder, “I was trying to bring Buffy back by summoning a demon to exchange my soul for her bein’ alive.” It was a haunting confession of someone truly delusional.

Now one year later, Millet has been released to be on parole for two years. He has a long list of guidelines and rules he has to abide by including staying within the confines of the Hathian area, (This does include Black Bottom, District 8, and Voudu), no alcohol or drugs, and not possessing any firearms or weapons, among other restrictions.  He also is required to complete 2400 hours of community service and a weekly psych evaluation observing his mental state. If he is found breaking his parole or is deemed mentally unfit for society by any state appointed psych member he is to spend the full maximum 72 hour sentence in the HPD jail as well as being subject to trial with the possibility of serving his full time in the Louisiana State Penitentiary.

Even with these harsh restrictions one must wonder if the streets are safe with this well-known criminal on the loose. This was not his first kill. Years ago he was convicted with first degree murder of Adriana Gambino. He ruthlessly stabbed her and then dismantled her head, put it on a stick and then left it by the HFD station. His history of violence is both brutal and disturbing. These are the people they are let out onto the streets? The citizens of Hathian should not suffer because of the overcrowding and budget problems of HFI.

One has to wonder what other dangerous criminals are being released onto the streets both in Hathian and Dead End because the staff of HFI can’t seem to keep reign of the High Security prison. Will there ever be a time when our citizens could walk the streets without the fear of being maimed by criminals that not even our state can contain? One could only hope that the great state of Louisiana comes to its senses before more blood is spilled on the streets.