For a girl who spent the majority of her adult life disillusioned into the obsessive hunt for supernatural creatures such as vampires, werewolves and zombies; it seems appropriate that mourners should gather for the 3rd annual Buffy Summers Memorial Service. The service was held at AS Funeral Services out in the Vodou neighbourhood on Saturday, February 2nd at 4pm in the afternoon.

Very much like the undead she sought to vanquish, Ms. Summers has risen from the dead twice before, leaving those who loved her to suffer a broken heart time and time again. This time was no different. The solemn and dignified service was filled with tears and painful recollections of the girl that will live on in their memories. It seems as though she may remain there this time with cremation having been performed following the Eulogies of family and friends. 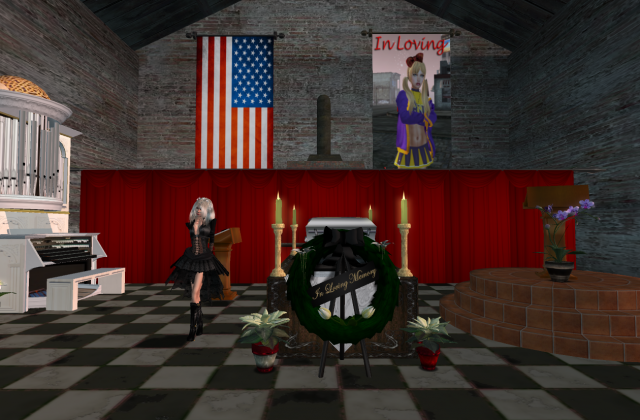 While some mourners chose to quietly suffer with the ritualistic loss of a cherished friend or family member, there was one outburst that was quickly contained by the Funeral Director. Ellis Millet, connection unknown to the deceased, started to cry out that they had to get her out of the flames before she died.

As the commotion settled, it was plain to see that Ms. Buffy Summers was seen off for the final time. Ashes to Ashes, Dust to Dust.

Buy One, Get One Free @ The Poison Apple