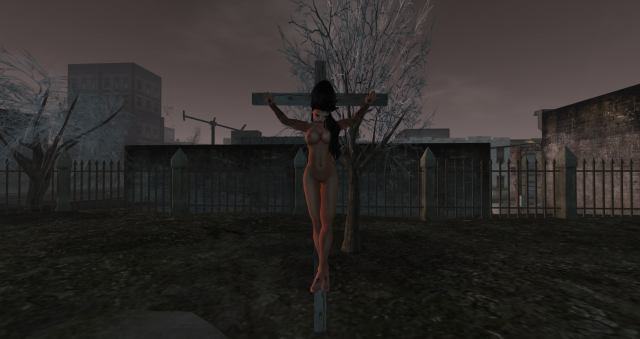 A passerby caught sight of some gruesome gang on gang violence Sunday morning as they passed by the graveyard and snapped a photo on their cell phone of a girl being nailed to a cross.  “The figure was an Asian male, wore one of those armbands that people say belong to the Rejects.  I think it was the one they called the Worm.”  The person suggested that they had read about the same figure in several reports over the past year.  The girl was potentially identified as one Lucy, seen often around the graveyard or Pariah Crow.  Not very much was known about the incident as the civilian was too afraid to call for help, choosing to leave it alone for what it was. It was only when the pictures were brought in that much in the way of identification was done.  Upon investigating the scene later, all that was left was the blood and a cross still hanging.  No one knows what happened further that night, but it gives this reporter another reason to avoid the graveyard.