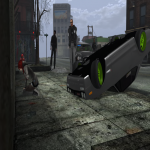 A police car chase along Hathian Highway ended dramatically when a Caucasian female, thought to be in her early twenties, ended up losing control over her sports car. Lieutenant Gutter and Officer Creotz apprehended the female, identified by an anonymous source as Lena Swan, on the charge of reckless driving but Swan is also being held in connection with the murder of Officer Rudolf, 31.

“She lost control and ended up upside down and almost killed a little girl that was standing there” Lt. Gutter described how Swan managed to endanger the life of a child who was standing on the sidewalk at the time of the pursuit. “After seeing my damn light and sirens she still continue doing 75 – 85 on a 35 MPH zone.. almost killed that poor little girl.” The sports car flipped over and up ended on the sidewalk, Swan managed to get out without extensive injury.

“The car she was speeding away in was all modified, something you see them street racer do, all suped  up with this and that all imported illegal parts according to what me and the other officers seen.. but the car right now is being strip at the impound lot for more evidence and all that good shit, I have a strong feeling there’s an illegal street racing team going on in this town.” Lieutenant Gutter revealed, there have been several reports of illegal street racing in Hathian but as of yet there have not been any arrests made in connection with this although Gutter also revealed that Swan and a friend had been chased by police before, with two other cars involved in an illegal street race but managed to escape.

The Lieutenant also revealed that Swan is currently being held in suspicion of being involved in the recent murder of Officer Rudolf. “There’s a car we are looking out there that was involved with the cop killing incident at radar..” adding that, “she is a link to the murder of Officer Alphonse Rudolf. A witness left a statement with her description.” The witness, Andrea Moretti,34, was previously held on the charges of murder but was later found innocent and released. According to Moretti she’d witnessed a man and a woman fleeing the scene of the murder and her description of Swan was a positive match.

Moretti spoke to the Observer and revealed that she had been to the HPD to identify Swan as one of the culprits. “The person who was caught..Lena Swan? I’m positive it was her. 100%. She was not alone in the murder though, I’m sure she had a large part to play in it. It’s obviously a frightening experience, but for something like murder. It’s expected…” She also revealed that she hadn’t let her treatement at the hands of the HPD affect her decision to come forward and identify Swan. “”I had to suck up my pride even after being beaten savagely by the members of the HPD. There was something bigger at risk. The family of the victim need to know what truly happened to their son, their brother, their father or whomever. I did my own crime and I paid for it, with guilt and being questioned in long gruelling interviews by Gutter himself.”

Although there is one more suspect at large, the Lieutenant believes that justice will be served. ” We know who the suspect is for the cop killer, and he can run but he can’t hide, it will be a matter of time till we get our hands on him..” adding “we have a cop killer on the streets and justice will be serve either the good way or the hard way I promise!” It seems the HPD have one suspect, it remains to be seen whether the other suspect, believed to be Dontavius Streeter according to an anonymous source, will escape arrest.