Detective Moonshadow, 21, spoke to the Hathian Observer recently about her abduction and torture ordeal, identifying her alleged attacker. Shockingly she claimed that a Doctor Cayden De Luca,26, who works for Hathian General Hospital, was the man who viciously maimed her after kidnapping and drugging her. Moonshadow revealed she had her breasts chopped off and her uterus removed as part of the torture she endured. The detective claims that she was kidnapped from her very own residence at night. “I awoke to find a person leaning over me, they were wearing a mask and they held some rag to my face…I do not remember anything else about how they took me….but I later discovered there were two persons, a male and a female….the female had shot out my locks with a silenced pistol..it would appear they used zip ties to bind me and carried me out…..they were disturbed by a neighbour called Villia….the female shot Villia and they took me away in a vehicle, believed to be a taxi” She added that, “I was taken to a basement..I was held there and bound…..there were, torture devices in there…I was played a continuous loud static noise and subjected to strobe lighting….Cayden came and he…beat me…..then he injected me with a cocktail of drugs, mostly a high dose of PCP…it did things to my mind…..I became very paranoid and afraid..I do not know how long I was there in that state but it was days….I do not know who came or went or what they did….it was..a constant nightmare.” The Detective believes that the reason for her abduction and torture was due to her police work and for attempting to stop De Luca from gaining custody of his son who is believed to be in the hands of foster care. “ I had built up a strong case against him and a judge signed and arrest warrant for him and two others associated with him, the judge also granted a search warrant for his home, De Luca Villa and the basement where it had been alleged he subjected victims to torture..there was a security leak, somehow Cayden found out about my cases and my contact with CS and I was taken before the warrants could be served..”

Detective Moonshadow is taken away from the doctor’s residence

Officer Moonshadow revealed how she was rescued: “5 days after I was taken my colleagues executed the planned search and arrest warrant on De Luca Villa….I was found and rescued in the basement by my own dear partner, Detective JK Ryoutaro..” The officer made it clear that she wished to warn the female citizens of Hathian about De Luca. “the women of Hathian must be warned what a monster this man is and never to trust him…..he uses the skills taught to him to heal in order to commit hideous acts of torture and this is the result.”

The Hathian Observer was able to contact the doctor himself where he spoke out on the allegations. ” I can only hope she receives the mental health care she needs to overcome whatever has her living in a dream like manner.” De Luca declared as he went on to say that he had offered the officer his help and services, ” Do you think that is the first time I have taken a patient into my home to care for them due to the fact they cannot pay for the medical treatment they deserve? I have all the medical documentation I have to prove my activities were nothing but professional.” adding that “If there was anything I was guilty of, it was caring too much for a patient in need.” De Luca also stated that “When I have my day in court, and the accusations are disproved and the medical documentation proves that my activities were medically warranted, would you be doing a follow up interview with the Officer about her lies? She is the reason a young boy was tazed and nearly died, yet I held strong to my oath and treated her as any Doctor would.”

De Luca also offered his opinion that “I personally feel that Ms. Moonshadow would benefit from psychiatric evaluation.” emphatically denying all charges levelled against him. The doctor is not unfamiliar with controversy- one incident involved the doctor ‘abducting’ 11 year old Teyrin Miller which also saw officer Moonshadow tazering the child in an attempt to stop De Luca from evading charges on him. De Luca has also been linked to the Crows, a well known gang that operates in Hathian who typically wear black and are known to be mentally unstable. Details of his involvement with the gang would seem to support the allegations that the officer has brought against De Luca. When asked about his connections with the gang, De Luca was quick to respond. “Malice Crow is a personal friend of mine and I offer her my assistance and have been her Physician for years…all accusations and all can be disproved.” 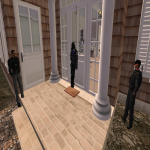 Officers at the front door of the De Luca residence

Officer Moonshadow has been kidnapped and tortured before by the group of individuals associated with the criminal figure Zero. With the often violent nature of police work pyschological effects accompany any trauma. The officer is adamant that she was abducted and tortured by the doctor, a figure who has been associated with controversy and gang members before.

The question here might be what would the officer-a member of a force dedicated to protecting and serving the community- have to gain from smearing the reputation of the doctor? The answer might lie in the tazer incident where Officer Moonshadow was discredited and her career at stake by the bad choices that played a part with De Luca’s involvement. Or she might be telling the truth and if so then Doctor De Luca is a part of the disturbed and violent members of the city who should be arrested for the saftey of the citizens of Hathian. The upcoming trial and it’s results will hopefully expose the truth for what it is, in the mean time the doctor and the officer continue to serve the community.
Share this