We’ve all grown up reading comic books and watching movies about super heroes. Men and women that dress up in costume with phenomenal powers that protect the helpless, the innocent.

So what happens when a mysterious masked figure appears in real life, right in front of you, to offer a helping hand when you need one? You immediately think super hero.

‘The Mask’, as this reporter has taken to calling him, is one such figure. Not so much a super hero, but a mysteriously masked figure, benevolently helping others when they’re in need. This particular costumed figure was found to be helping an injured woman just behind the arcade early this evening.

The man refused to give a name when asked who he was. He said it was not important. But this reporter thinks otherwise. Any scraps of kindness in a city like ours is to be recognized, regardless of how small the gesture may seem. 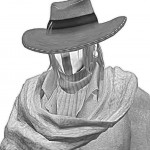 Described as being tall, roughly between five foot eight and five foot eleven, ‘The Mask’ has dark hair almost black which he pulls back and tucks under a wide-brimmed hat. The mask that he wears is white with a thin black stripe running down the arch of his nose to the chin and another cross-stripe over where his eyes peer out. He has a loose fringed scarf that he wears draped over his shoulders with thick boots, cargo pants and a heavy jacket underneath.

This reporter is looking for any information or reports of ‘The Mask’s acts around town and will gladly reward accurate accounts. Contact Doniella Maddox at 661-485-1234 (doniella.calamity) with your tale of ‘The Mask’.