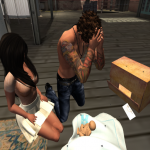 When officers arrived on the scene after responding to a 911 call from the Hathian Health Clinic in Hathian early Tuesday morning, they were shocked and appalled at what they discovered. Local Hathian General Hospital and City Clinic Physician Cayden De Luca was simply opening his morning mail when  he found an old beat up box on his desk. Sources indicate after removing the tape, black widow spiders began to erupt from inside, where the deceased body of a premature infant was found wrapped in a soft blanket with a note. Later the same evening, it was reported there was a second premature infant child delivered to the Health Clinic by what authorities are now calling a person of interest.

While police at this time will not release any further information regarding the investigation, Officer Bliour Michaels with the Hathian Police Department did release the following statement, “I was asked to respond to a 9-1-1 call regarding the possible death of an infant at the Hathian Health Clinic. Upon my arrival I made contact with Cayden De Luca and Jaded De Luca Rossini and the story began to unfold. I have been working on this case from start to finish, the evidence is being processed, and we do currently have a suspect which I cannot disclose at this time. I have assured the family that I would do everything I can to help them find justice and peace for these heinous crimes. No parent should ever have to see the death of their own child, let alone have it delivered to them both ways that it was.” Both infants were transported to Hathian General Hospital where a complete autopsy and DNA analysis was completed and confirmed both infant children belonged to Dr. De Luca and Berthier Street Bakery manager Aizzel Beck. The De Luca’s family attorney, Jaded Rossini, has released the following statement, “The De Luca/Rossini family is currently grieving in their family residence in Hathian. The family has suffered a tragic loss and only immediate family members are being allowed in the home at this time. We thank everyone for their phone calls and words of encouragement, however we would like to take this time to grieve as a family.”  A memorial service will be held Wednesday, August 1st at 7:00 SL at the Trinity Church located in Vodou.”