A young girl, aged 10, was found at entrance to the burning building by Lieutenant Kohime who managed to rescue the girl from the flames and carry her to safety. The girl’s name has been witheld for her own protection. 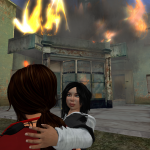 The small girl struggled to remain in the Lieutenant’s arms however, continously crying out and yelling: “Stop! You’re ruining it!”  in the direction of the fire, repeating this cry a few times according to several eyewitnesses. These statements aroused the suspicion of the authorities who have since discovered the young girl was set up to start the fires. Lieutenant Kohime delivered this statement the day after the fire: “ The arson inspection trained  dog, Dori, alerted the FHD staff to  multiple points of  the origin of the fire. I ran a field test and discovered gasoline was used to start these fires which I belive were started by the young child.As the poice and I questioned the girl, it was discovered she had been hired by Mr Chris Devon of Devon Propertied LLC and Blackriver Security to burn the Rosemont Apartments  down. I since have  had a consultant run Mr Devon’s financials and discovered he is very much in the red. In a call to his insurance company, I discovered he had increased the insurance value a week before the fire in order to collect enough money to cover his debts.” The Lieutenant’s findings sparked a search for Christopher Devon, only for the HPD to find he had fled Hathian, leaving before the fires had been started. All properties that belonged to Devon have been repossesed. It remains to be seen what will happen to the young child who was under the custody of the Child Protection Service as she was being questioned by the HPD.

Firefighters Lt. Kohime and Vincent Mastada and Logan Selijan were joined by the chief Roger Messmer, as well as paramedics Juicy M. Stanfield, Carson Capelo and Kayla Stephens. The courageous and skillful team of firefighters and medics worked together to stamp out the blaze of fire raging furiously within the apartments, a hard task as the fire was burning hard and steady for hours, with the crew using gallons of water and foam to put out the flames.

Tempers seemed frayed after the fire had been put out by the hard working and courageous FHD between the “probies”- involving harsh words exchanged by Vincent Mastada and Carson Capelo and J. Stanfield. Things seemed to be strained between the new recruits who were brought to work together on scene for the first time. This does not take away from the excellent work and service they brought to the job, for which many citizen’s of Hathian are grateful.

Letter to the Editor: HGH following the example of the HPD?