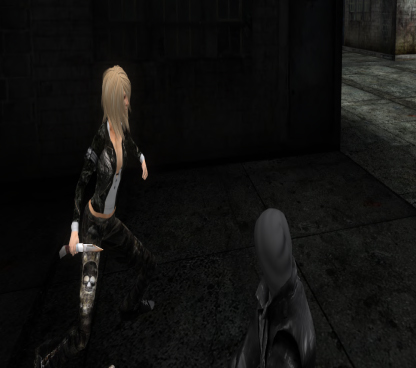 On Friday, March 10, two suspects were seen brutally attacking a man in the alleys behind the construction zone by officers Andrea Mizser and Paul Carr. One suspect was identified as Hells’ Saint member Cassandra Harper. The other was not identified, but is described as a tall african american male, muscular build, and short hair. The victim was identified only as The Snoodle.

While on patrol late friday night, the officer heard some screaming from the alley, investigated. According to reports, what she saw first was blood everywhere, and Cassie quickly concealing “something” as soon as she told them to stop. After a brief struggle, both suspects fled the scene. The Snoodle had a stab wound to the side, multiple deep facial lacerations, and extensive bruising to the ribs caused by a baseball bat.

Cassie was taken into custody the next day after a brief foot chase. The other suspect remains at large. Cassie is claiming self defense, but the extent of Snoodle’s injuries do not support her story. It is far more likely that this was an act of retaliation for Snoodle’s January murder of Britta Lexington, another Hell’s Saint.