Letter to the editor

Regarding your interview with Captain Carver, I feel that I have to clarify what really happened at the Titty Twister on Mardi Gras.

First of all – most of the police’s victims were -not- ‘known criminals’. I am working at one of the businesses on Bourbon Street, and I know a lot of people who were targeted by the police. Our ‘crime’ was to stand in front of the club and to dance. The police threatened and attacked and injured at least three female staff members of the Titty Twister, none of them armed, none of them with ‘extensive criminal records’, none of them involved into any violent or criminal act. Another victim was a pregnant girl who happened to stand outside the club, she was dragged away by an officer and I am not sure what happened to her. 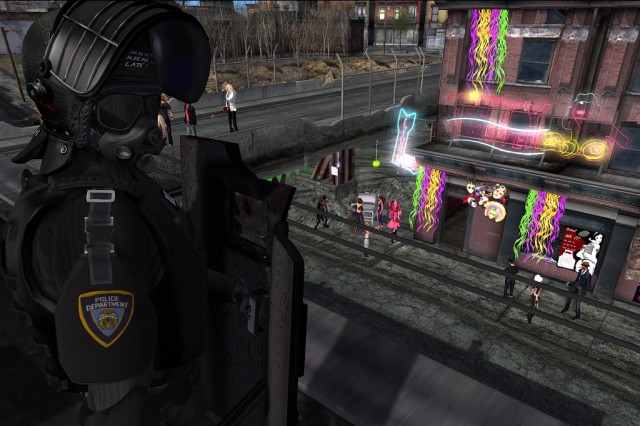 I was told there was a small commotion between two alleged gang members, but when I arrived at the scene, things were already calm again. I watched from afar how a topless girl in a feather costume negotiated with the police. She had her hands raised above her head and she was trying to convince them that the party would remain peaceful. Then they shot her.

There was absolutely nothing violent going on when they opened fire. It was surreal. All those masked officers in full riot gear. They were laughing, one of them was chanting fescennine obscenities – they obviously enjoyed themselves.

One of them aimed at me, and I was hit by two rubber projectiles, directly against my chest – and I was only wearing a feather bra, you can still see the bruises. At the same time they shot pepper spray. I was down, couldn’t breathe, the pain was excruciating, and i was convinced i would die.

Close to me two other girls made it into the entrance of the Twister, but they were beaten and cuffed, one of them had a head wound and almost passed out. They cuffed me, too, and one cop dragged me to the side. Then they threw pepper spray canisters into the Twister.

Andel walked up to me, taunting me – and I want to quote him: “we will smoke out the pussies inside.” Again – there was no violence coming from the Twister. Andel let his officers line up and told them to fire at everyone who would come out of the door – and those two girls were still inside, cuffed and injured, screaming for help. The cops opened fire on the people who tried to escape from the pepper spray, again obviously having fun with what they were doing.

Andel told me, “it’s always been my party, I just allowed you all to say it was yours”. And yes, that’s exactly how the HPD behaved. It was an act of arbitrary, unprovoked, random police brutality when they attacked the Titty Twister. They targeted helpless and unarmed citizens, and I was under the impression that they just enjoyed to try out their weapons. Those who were injured that evening, including me, weren’t even charged or arrested – another proof that we didn’t do anything illegal.

I sincerely hope you will print my counterstatement, Hathian deserves to know the truth.

B. N. (full name removed by editor)
Share this