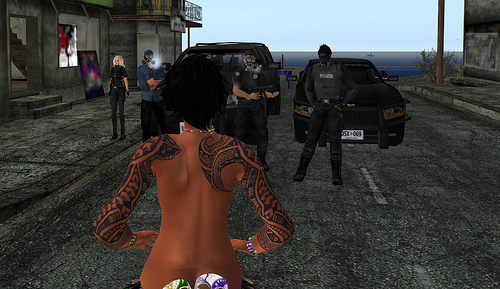 On Fat Tuesday a Mardi Gras celebration commenced in front of Titty Twisters. Like any Mardi Gras party there were boobs, beads and dancing. It was supposed to last all day and all night–or at least until the last drunk straggler found their way home or to the nearest alley to puke their guts out. However it was cut short by HPD officers allegedly attacking and arresting citizens. I have an exclusive interview with someone who was there at the fiasco, giving me the details. The information I gathered was disturbing.

Hathian Observer: “A secret source revealed to me that you were at the Mardi Gras celebration on the twenty-first of February is this correct?”

Witness: “Yes, I was.  I got there in the late afternoon.”

HO: “Was it a peaceful proceeding?”

Witness: “It was for a long time, people were enjoying themselves.  Then the Crows came, and cops started blockading the street around the same time.  One of the Crows attacked me but the rest left and I managed to get her to leave.  That didn’t matter, because the cops started getting on riot gear even though the situation was calm.”

HO: “I see. I’m not sure I’m entirely familiar with the name. Who are the Crows? Are they a new gang?”

Witness: “The Crows?  Far as I know they’ve been around for a long time.  Tend to wear makeup and odd clothing.”

HO: “Mmhm mhm. Do you know the one that attacked you?”

Witness: “Yes, but for personal reasons I’m not giving out a name.”

HO: “I see. I’d say report it to the HPD but…that brings me to my next question. It was completely calm yet the HPD attacked the people at the party? Is that what I’m hearing? Are you sure there was not some hidden reason you did not see?”

Witness: “Yes, I was roughly in the center of the street, between their lines.  People were a little drunk but there wasn’t any violence save what the woman tried on me, and she retreated.  I tried to talk Andel out of going at it when I saw they had put on riot gear, no luck though.”

Witness: “[Hendrich] Andel gave the orders for [Sora] Senizen to shoot me as I stood there trying to talk to them.”

HO: “You personally? The fight with you and the Crow had broken up by then, am I correct?”

Witness: “Yes.  Once the woman who attacked me ran off, I approached the police with my hands up to show I wasn’t armed.  As I was trying to plead with them not to get into it, Andel gestured to Senizen, who had his gun raised, and then to me.  Then Senizen shot me in the chest with a non-lethal.”

HO: “Wow. That sounds quite unjust. And then what happened? What other cops were there?”

Witness: “I recognized Senizen, Andel, and a blond woman, I think her name is Chase.  There was another man near the first two who I don’t know.  My back was to the rest of the street.  I heard shots popping off and people screaming, but by that point Senizen shot me again and I was down.  When I got up again, they had all walked past me towards the Twister.”

HO: “Wow. So after you got up, what were the cops doing then?”

Witness: “I’m not sure.  I saw some of them appearing to be arresting people up the street, but it looked like they were all headed into the Twister.  After that I left, I didn’t want to get thrown in jail again.”

HO: “Wow. What a mess! Any closing statements?”

Witness:” I suppose I’d just have to say that this is another example of the HPD, and Hendrich Andel in particular, exercising unnecessary brutality against the people of this city.  They’ve done it before, they did it today, and if no one does anything they’ll do worse in the future.  It’s only a matter of time before someone innocent ends up dead because they were in the wrong place.”

How the Grinch Stole Mardi Gras…