Late Halloween night, a pair of paint bombs went off within city limits. The intended target seems to be local livestock. The perpetrator got into a chicken coup in Vodou and into a small field containing a few cows. In both cases, the bombs were set by antique timers and the gates left wide open. Surprisingly, most of the animals didn’t escape until after they were already restyled. 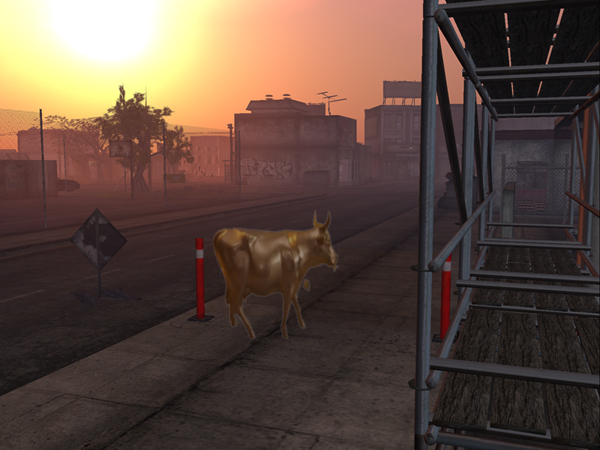 According to Lieutenant Dax Carver, commanding officer of the HPD Detective division, The bombs were crudely constructed out of cans of gold paint, a nine volt battery, what was described as “used” household wiring, and a couple of m80’s. Carver further explaned that they were held together by superglue and duct tape. The Lieutenant refused to comment further citing policies regarding ongoing investigation.
It is unclear exactly when the suspect entered the properties, but authorities guess it was sometime between midnight and 2AM, shortly before the bombs went off. Several chickens and cows were reported missing, but there have been rumors of golden animals wandering the streets. Anyone who sees a golden animal is urged to call their local animal control agency or the Hathian Police Department. “While this may appear to be a simple halloween time prank, we take the any harassment or injury to livestock very seriously. This is someone’s livelyhood that is being damaged, the offenders will be prsecuted to the full extent of the law, anyone having information is urged to come forward,” Carver explained.
Other than being gold, those who reported seeing the animals say that there was no other harm done to them. Investigators say that the inside of the chicken coop got covered in paint, but there is no visible damage to the structure, and no other damage to the inside. At the cow pen, the only evidence is the discarded and trampled bomb making supplies. Everything else seemed to be covered up by the cow stampede.