The Hathian Cancer Benefit, which was held on October 1st, was considered an amazing success to all those involved.

Six different booths were set up by various people, businesses, and groups, ranging from bake sales and games, to free cancer screening and gym memberships. Though, the booth that stole the spotlight was most definitely the pie and tomato toss table. 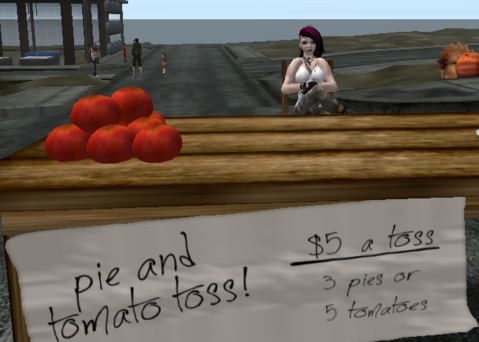 Kay Varnish and Valmont Marseille were the stars of the booth, taking tomatoes and cream pies in the face to raise money for charity.

“I’m glad Valena earned lots of money, even though I’ll never eat a tomato again,” says Varnish, pictured to the left, just before police Captain Andel threw a tomato at her. “Hopefully will happen again, maybe with Captain of the police in that seat. That’ll earn a mint.”

A total of $373,692.57 was raised from the event via donations from at least fourteen different individuals, families, and businesses, which was more generosity than Valena Dowe, the event’s coordinator, though she would see.

“I didn’t even expect to get five thousand dollars,” gushes Dowe, grin on her face. “But to get 75 times that much was absolutely astounding.”

She presented the cheque to a group of staff, including the Board of Directors, on October 9th. They were elated with the amount, and Gavilan revealed that an anonymous donation of $1,000,000 was put into the trust fund along with the cheque that was presented.

“It was a wonderful job done by all to raise the money, and a lot of hard work by Miss Dowe and the others who helped with the benefit.” says Allestria Slade, head nurse and part of the Board of Directors. “The money will help a lot of people who need it. I am proud of how much money we could all raise for this cause.”

Though that was not the only thing to celebrate that evening. Shortly after, Kayl Soyuz, senior physician, proposed to Lake Gavilan in front of employees and friends alike. Gavilan, seemingly overjoyed, said yes, making a grand ending to a perfect evening.