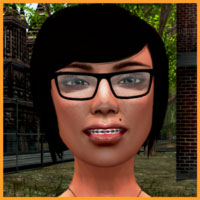 I’ve been in and out of town these past few years and what I’ve found while being out is the overwhelming belief so many people have. It’s not necessarily Christian; Buddhists and Jewish people have their faiths held high, too.

So when I last came back here, it hit really hard that so many Hathianites have lost their faith. That, or they’re just really great at concealing it. I have a feeling it’s the former, but why? I spoke to a woman last night who admitted to being raised as a Roman Catholic, but she didn’t seem so admittant to living that kind of lifestyle.

Which is fine, of course; people grow up, interpret how the Bible can best serve them and the lifestyle they lead. Was this woman actually still leading a life of God, though? Whichever one she might believe in. Does anyone, having lead a life with God handed to them on a platter with all the answers right there, actually take those answers and use them through adulthood?

This woman was happy enough when I told her I was Christian to direct me towards studying Religious Studies. [Being a Sophomore though, I pretty much have my course figured out.] So I can only guestimate that she’s at least accepting of religion and the people who are so inclined.

There are of course ample opportunities I’ve had to meet the adamant non-religious people. They’ve been varied, just as much as the various Gods there are to believe in. [Not that you should just believe in any old God.] One in particular has me puzzled; they’re a nice enough people and have their problems, personal and public. What puzzles me is their knowledge of Christianity.

Have they had that knowledge all along? Or was it me and my introducing them to God that made them want to know more?