Last night, Harley Riler, accused serial killer the Headless Harvester, stood before a jury of her peers in a trial filled with antics ranging from shouting, stripping, and thrown out testimonials, nothing you would’ve suspected from a group of seemingly civilized citizens, and was sentenced to death.

At six o’clock sharp, she was lead into the court room, cuffed, head hung as the room fell into silence. Almost immediately, proceedings began, and Sunhi Gavilan-Matfield was the first to take the stand. She testified about the death of her late baby sister at the hands of the Rejects, and how Riler was caught eating the dead child outside the Gein Burger restaurant, much to the horror and disgust of much the gallery.

During her testimony, Riler’s lawyer Dante Giordano objected a statement from the District Attorney Lillian Humphrey, which was sustained by the presiding judge Greenlee Morrisey, but Gavilan-Matfield started yelling anyway.

“She eats people!” shouted the gang leader, which sent the court into chaos for the first time that night.

The serial killer, moments after Gavilan-Matfield’s outburst, was heard saying, “I’d eat her again. She was real good.” 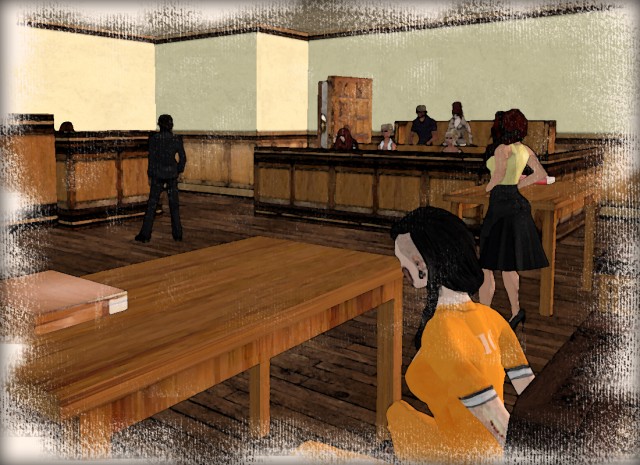 The witness started shouting profanities at the defendant, and was ordered back to the gallery as no further questions were required. The court calmed down when she was off the stand, though that didn’t last for long.

As she walked by Riler’s table, she reportedly spat at the woman, throwing the room into insanity again as the killer’s lawyer demanded Gavilan-Matfield be charged with assault. Instead, the DA withdrew the woman’s testimony, which sent her into an uproar.

“F*** you! F*** this, let’s get out of here!” she shouted to the group of people she was sitting beside, all of which followed her out, but not before sending a few challenging glances towards the people on the opposite side of the gallery, which had known members of the gang Lower Ninth Rejects, including Esperanza Hernandoz and Caris Winslet, as well as known Gein employees and even the woman’s son, who sported a sign that said ‘momma is inosent’.

Court was brought to order shortly after the woman left, but it wouldn’t last long as the next witness took stand; lead of the Headless Harvester cases and apparent former lover of the woman, HPD Detective Sargeant Dax Carver.

As he took the stand, Carver explained his role as lead in the cases, how he found human remains in the Gein Burger dumpster, how the DNA from the knife found on her when she was arrested matched not only her, but victims of her crimes, and how she gave it one last kick at the can, killing her own brother, Jonas Jameson. Though, when Riler’s lawyer started questioning the man, secrets began to unfold.

He admitted to be in a relationship with the serial killer, and even showed the court the scar of her name he has on his chest, which Riler’s lawyer argued showed what kind of intimate relationship the pair had, and that Carver was simply using this as a way to get back at her, and possibly obtain a promotion.

Riler, furious about his lack of emotion towards her, the woman he apparently once loved, jumped up out of her seat and threw the court into chaos once more, calling him a ‘liar’ and saying that he ‘begged for her’, that he ‘needed her’, that she ‘killed Jonas for’ him, and accused him of beating her so severely that she almost died.

He did not deny allegations about loving her, only objecting to her statement about beating her into an inch of life, which set her off even more. The police had to drag the woman out of the courtroom screaming. 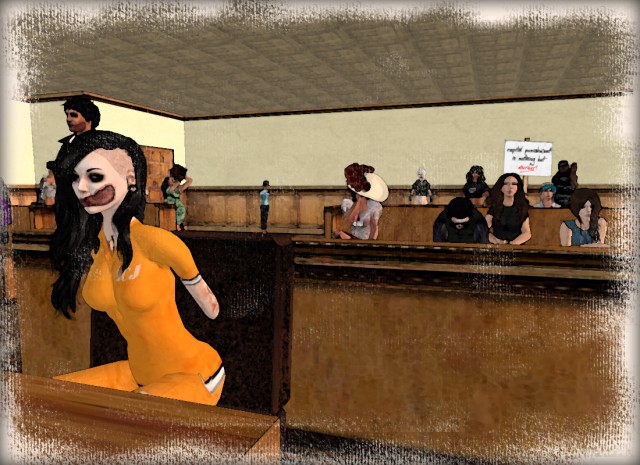 The last witness brought to the stands was the HPD Chief of Police, Nadir Taov. He testified that Carver did not plant any evidence, that it was collected fairly and in a just way, and that his men and women to do nothing but try to keep the citizens of Hathian safe, even with allegations and episodes of police brutality running rampant.

The jury was then sent to deliberation, but they didn’t even leave the room before coming up with a verdict. In record time, Perina McGinnis, Chief Editor of the Observer, announced they found her guilty on all charges, and another juror recommended the death penalty. Judge Morrisey, after weighing the evidence and verdict, sentenced Riler to death by hanging this Wednesday night at six o’clock.

Riler’s lawyer, who already seemed to have given up, threw up his hands and pointed to each member of the jury in turn, shouting, “Guilty! You’re all guilty!” and, “Hanging? What kind of a backwards town is this?!” to the Judge, before storming out, only stopping to expose himself and tell the DA to ‘suck it’.

Multiple people who were holding their tongues finally opened their mouths.

One woman targeted Carver, and proceeded to yell at him, while another went off about the ‘ridiculous’ sentence of hanging. She had been allowed to bring a sign in that said ‘capital punishment is nothing but murder’, which she ended up throwing at the DA, drawing blood, before she was tackled to the ground as she ran towards the woman.

“This whole courtroom is a farce!” she yelled before she was detained. “No one has the right to play God! God isn’t even real! You’re all going to Hell!”

She was cuffed and charged with contempt of court, resisting arrest, and aggravated assault, and proceeded to voice her loud opinion even as she was dragged out of the courtroom to be housed in the same prison as Riler.

With the antics of the trial, no one knows if Hathian will ever try to do one again, simply going back to the previous system of mass amounts of charges and insanely high fines. But one thing remains clear; justice for the victims was obtained, and the Headless Harvester will be hanged for her crimes.

Spectators wishing to see the hanging may congregate at the Old Hathian Church up on the hill by the bayou this Wednesday evening at 6pm ((SLT)).